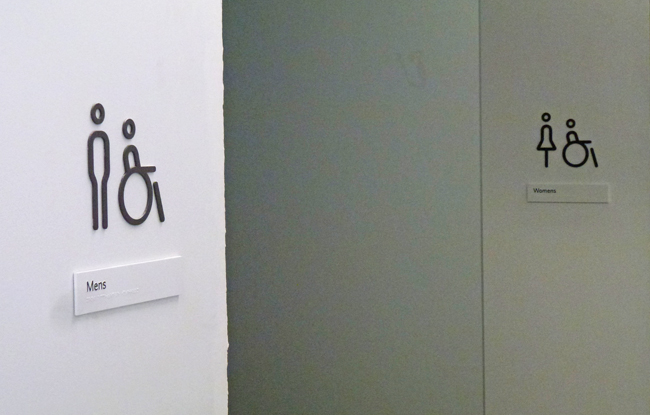 These wonderful signs for the washrooms were spotted at the Fort York museum. They are simple but so effective that words aren't really needed. 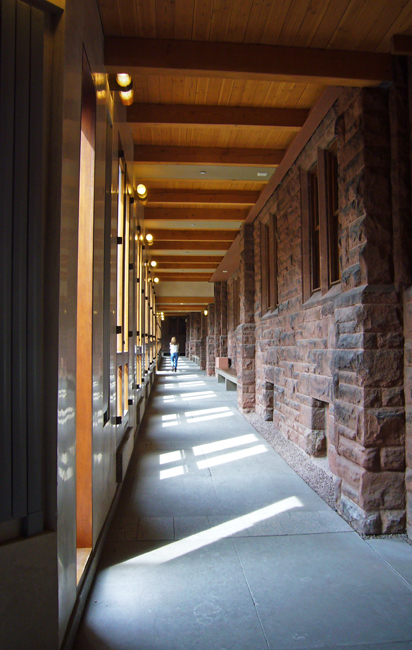 This wonderful walkway was spotted at Trinity College at U of Toronto. It was added on to the exterior of the original building which results in having that great stone wall for one side.

Labels: U of T 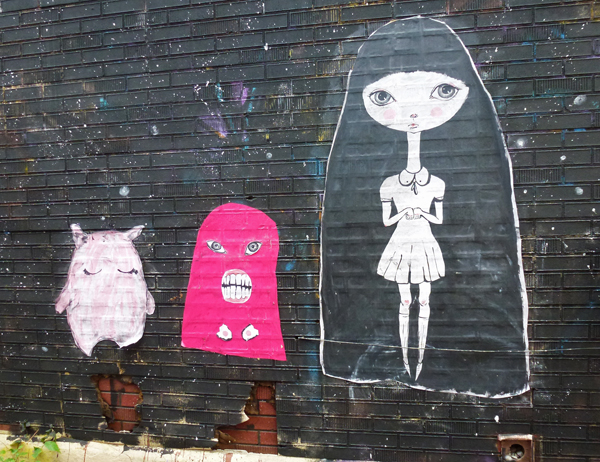 There is something cute about all 3 of these characters, even the pink one with the teeth. This is one from my archives and I have no idea where I was when I took the shot. In a laneway somewhere.

Taking part in Monday Murals. Click HERE to see more creatures from around the world. 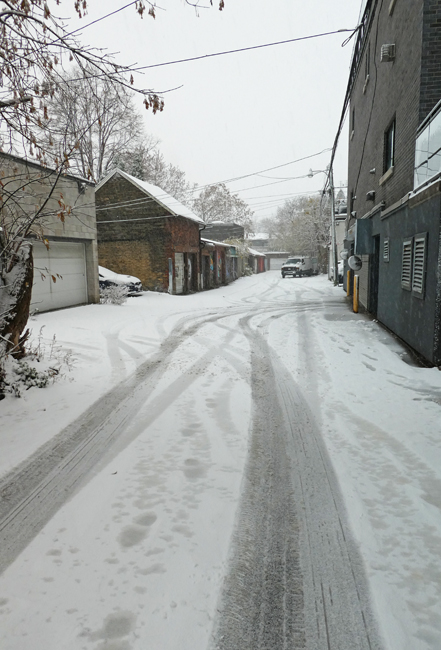 This is the view down one of our laneways in a residential area. The city doesn't really plow these lanes so if we get a lot of snow it becomes a community effort to clear a pathway for the cars. Everything looks so monotone at this time of year. 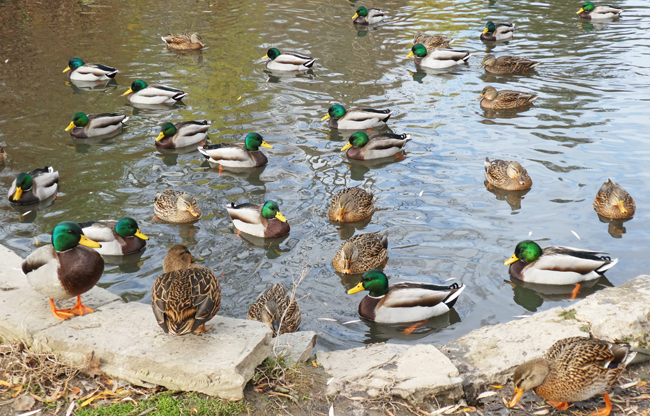 I went by James Gardens to see how the ducks were doing and they all seemed to be gathered at one end of the pond just leisurely floating around. They didn't pay any attention to me as if they knew I wasn't there to feed them. All was very peaceful. 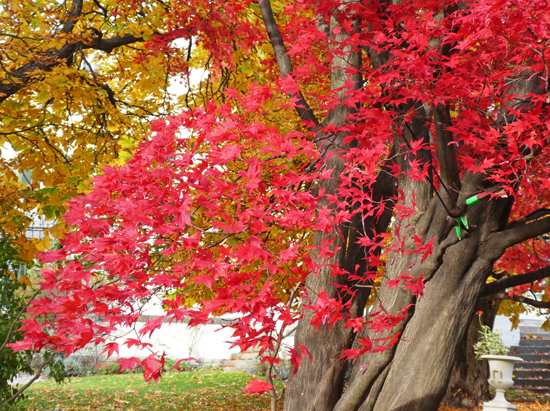 This shot of a Japanese Maple was taken a few weeks ago on the grounds of Spadina House. Beautiful all year, it had turned this vibrant red for autumn. I was not the only person taking shots of it. 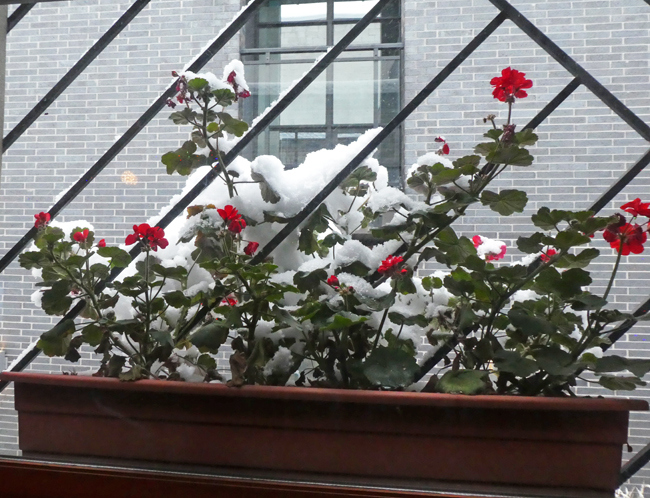 The snow last week also caught a lot of flowers off guard such as these poor Geraniums in one of my window boxes.  The snow probably protected them a bit from the cold and there look to be a couple of buds that may still like to open. Tough plants. 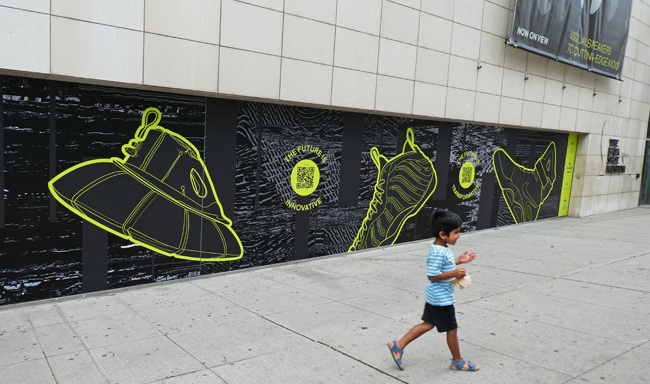 There is a show going on at the Bata Shoe Museum about sneakers of the future and all the innovations to come in production and features. I loved the young boy running by the high tech shoes while he is wearing simple functional sandals. Taken when our weather was a bit warmer than today. 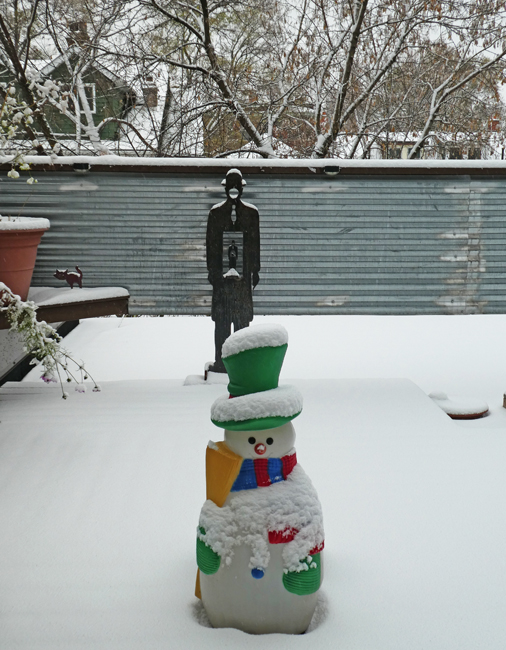 This was a surprise for me last week when we woke up to a nice snowfall and then the next night got even more. Frank, the snowman, had come out in the nicer weather the weekend before so he was happy even if drivers were not amused with the roads. The first snowfall of the season is always a shock. 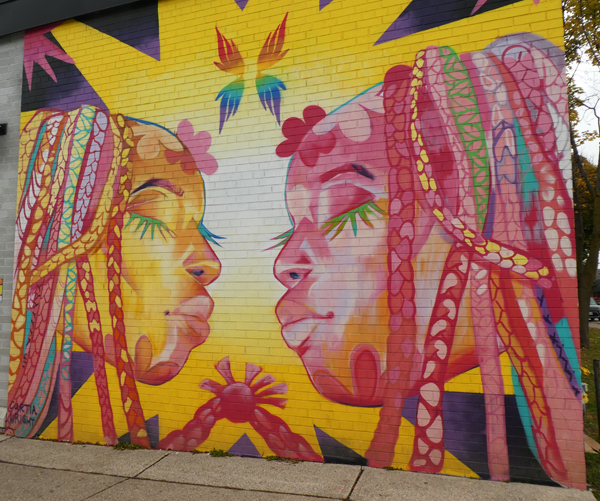 This mural was spotted in the Oakwood Village neighbourhood just south of the Little Jamaica neighbourhood along Eglinton Ave W. The artist for this one is Curtia Wright. It is good to see black lives celebrated.


This red truck was spotted in a laneway outside a mechanic's shop. It is a '67 Ford 100 and is in great shape as even the paint looks like it could be original. Pretty good for 55 years old. 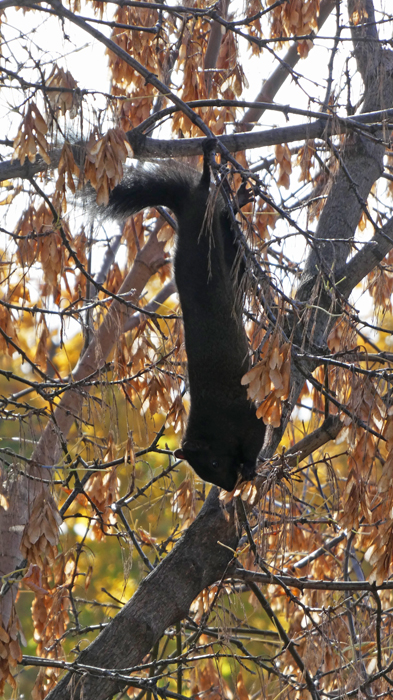 The squirrels have continued their antics in the Maple trees by my deck but they have eaten all the keys that were easy to get to so now have to change techniques to get at the ones on the ends of the branches. They are such great acrobats. If you look closely you can see that this one is using only one foot to hang on. Imagine eating upside down! 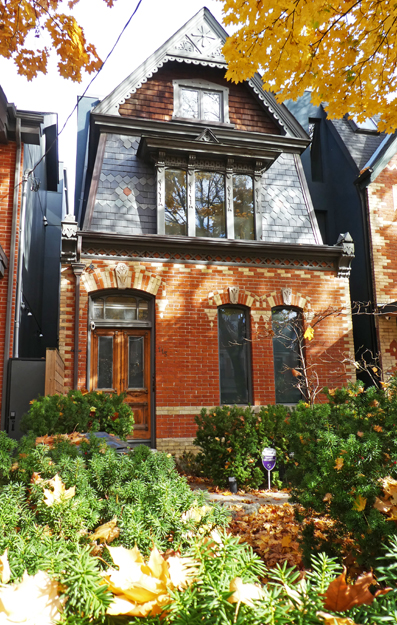 I have always loved this sweet house in the Harbord Village neighbourhood right near the U of Toronto campus. It was built in 1889 and has heritage protection as does its whole area. There are some lovely old homes there. This one has been so lovingly maintained it is hard to believe it is that old. 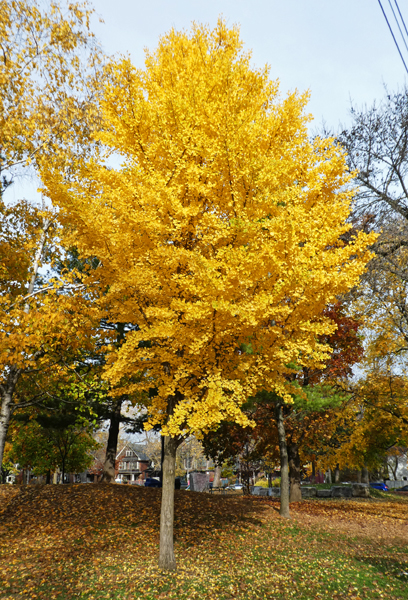 This is a Ginkgo Biloba tree which is fairly common here in Toronto. It is one of the oldest living tree species in the world. They all turn this glorious golden colour and are one of the last trees to drop their leaves in the autumn. And then they seem to drop all the leaves in one day which is rather unique. 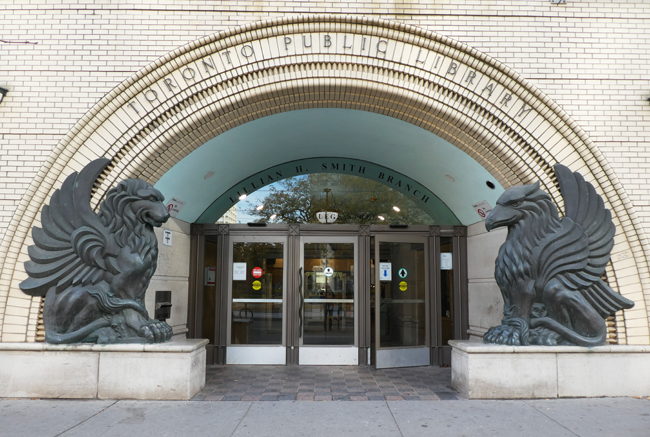 This is the entrance to the Lillian H Smith Branch of the Toronto Public Library. It was built in 1995 and is a standout along College St. The library has a huge collection of rare and notable modern children's book as well as an extensive collection of science fiction and fantasy. Those creatures are real attention getters. 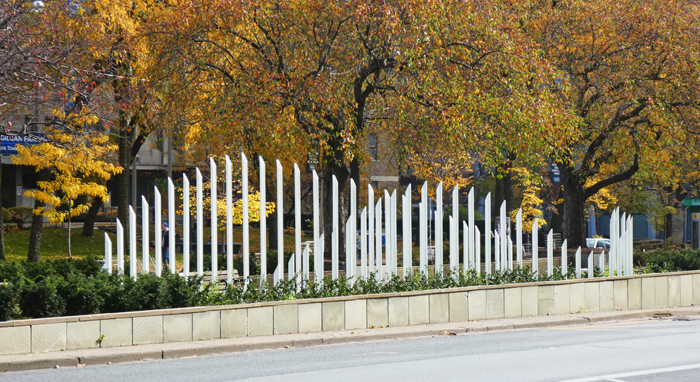 These reed-like posts, called Lightwave, are part of an art installation installed along the median of University Ave in the hospital district. There are several gatherings of them along the median and at night random waves of light move along them. They are part of a whole display called Radiant Journey which involves a light display in those trees. I haven't been by at night but even during the day I enjoyed seeing Lightwave. 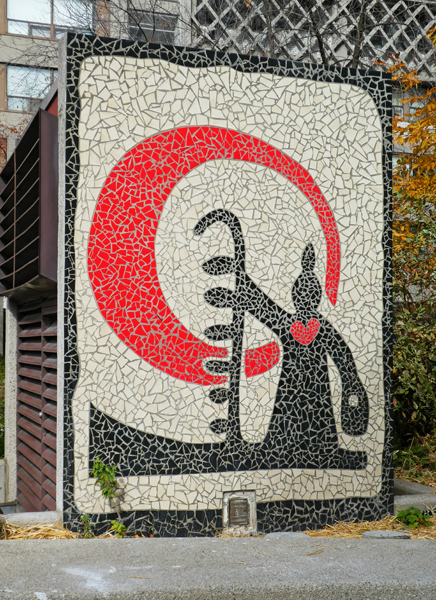 This sweet mosaic mural was found in the same small area as yesterday's sundial. I failed to get the name of the artist for this one but it has a real First Nation feel to it. I'll have to go back one day to check out whether there is any signage. I love the image in the mural - it seems rather comforting. 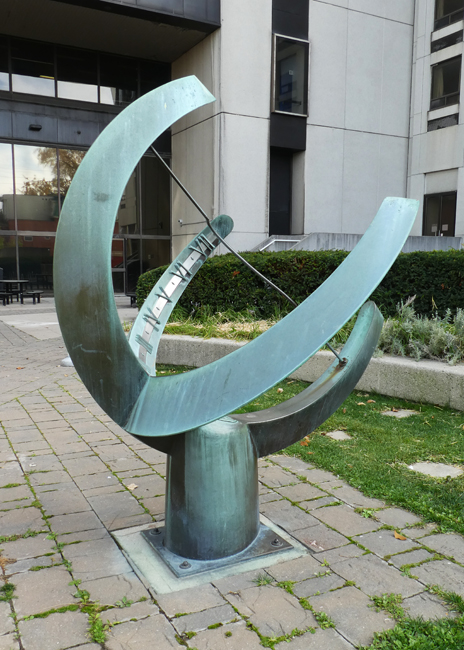 I spotted this sculptural sundial while wandering around downtown near University Ave. It's a nice one but unfortunately it is now almost surrounded by condo towers so the sun doesn't really shine on it. It looks good though.

Putting On Weight Before Winter 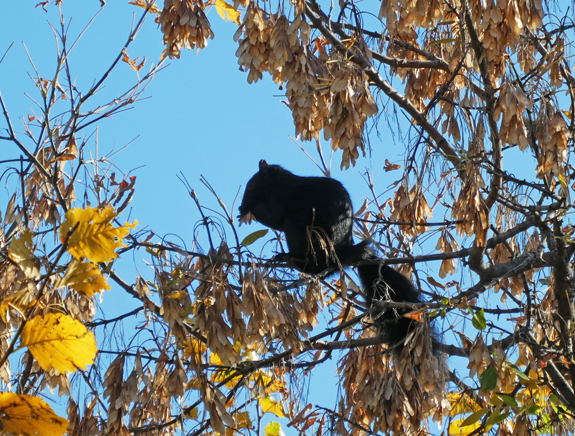 It has been fun watching the antics of the squirrels as they feed on the keys found on the Manitoba Maple trees just off my deck. They seem to spend most of the day out there. Usually there are 2 black squirrels and 1 grey one and they each grab their own area for snacking. All 3 of them are juveniles so their fur is in great shape and the black ones are very black as you can see in this shot. 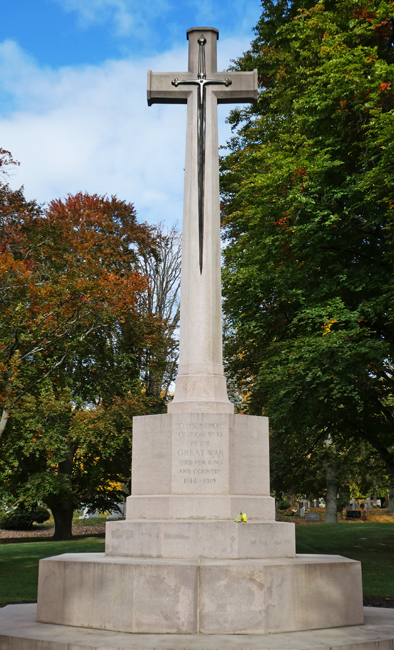 Today is Remembrance Day in Canada when we pay tribute to all those who have given up their lives for us all. This wonderful cross memorial is found in the veterans area of Prospect Cemetery. The inscription is quite worn but it reads " To the Memory of those who in the Great War Died for King & Country 1914-1919". The surrounding area has hundreds of graves of men who died too young in battle. Lest we forget. 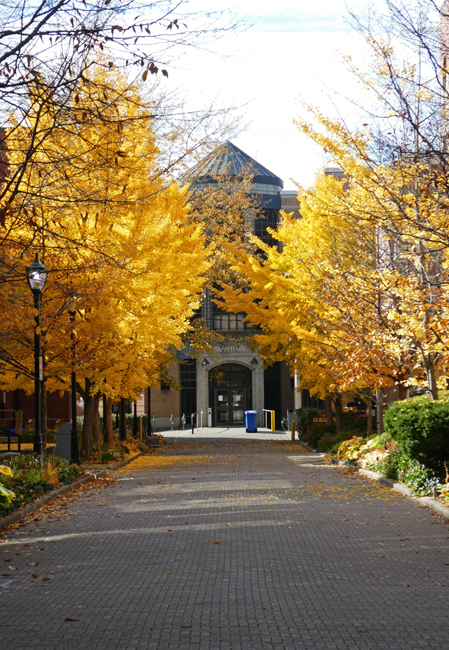 While walking through the U of Toronto campus I looked down a driveway and got this great view of Koffler House framed by golden trees. Koffler House is a multi-faith centre at the university.

Labels: autumn, trees, U of T 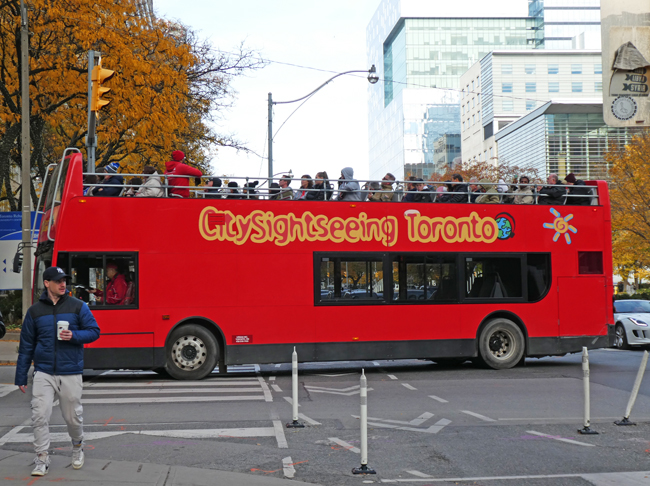 It was a bit cool out the day I spotted this sightseeing bus but everyone still had chosen to sit up top out in the fresh air. I have taken this type of tour in a few cities and it has always proven to be worthwhile. 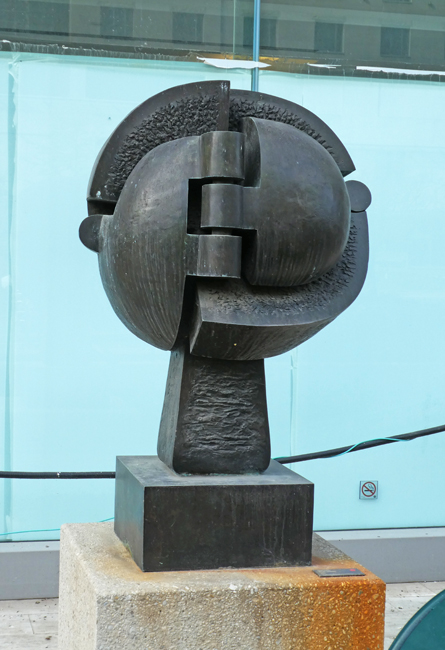 There are a lot of Sorel Etrog sculptures around the city but it has been a while since I have shown one. This one, called Dream Chamber, was spotted along University Ave by the Mount Sinai Hospital. It was done in 1976 and is on loan to the hospital. To me it resembles a head which would indeed be a dream chamber. Click the label below to see some more of Etrog's work I have posted.

This 8 storey high mural was recently completed along University Ave. It is a tribute to Terry Fox,  the great Canadian hero, and his Marathon of Hope. He was a cancer survivor who set out in 1980 to run across the country with one artificial leg to raise money for cancer research. Unfortunately after 143 days and 5,373 km his cancer had returned and he was forced to stop. He died not long afterwards. Terry Fox runs take place each fall across the country and other places around the world and have raised millions of dollars for cancer research.

The artists for this one are Alexander Bacon and Que Rock along with a team of 20 others. 400 cans of spray paint were used. 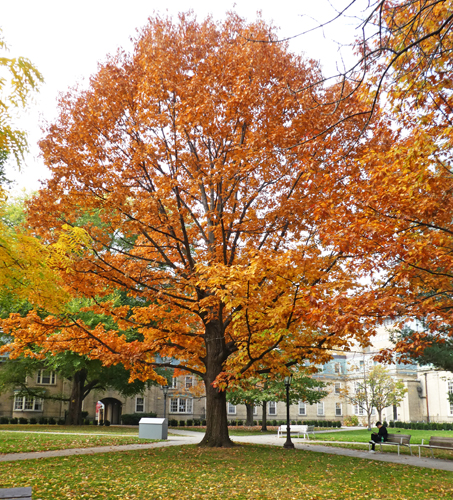 This wonderful Oak tree was spotted in one of the squares on the U of Toronto campus. There is so much construction going on at the campus that it is rather hard to find a peaceful place like this.

Labels: autumn, trees, U of T 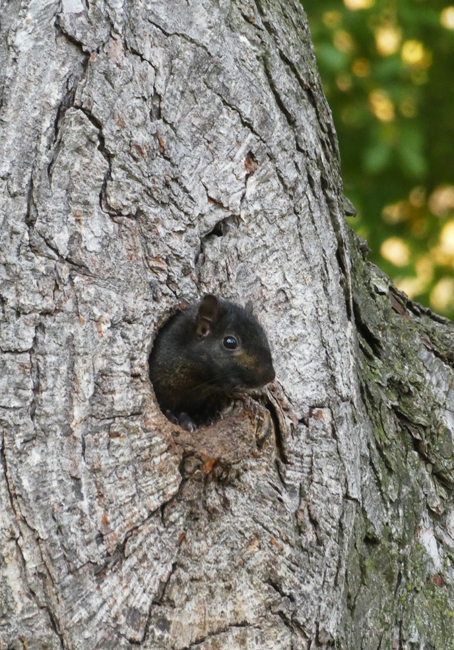 I was wandering around Prospect Cemetery when I heard a squirrel nattering away at me. It was up in a very tall Silver Maple tree and when I looked up it ran into this hole in the tree and seconds later was peeking out at me, still nattering away. 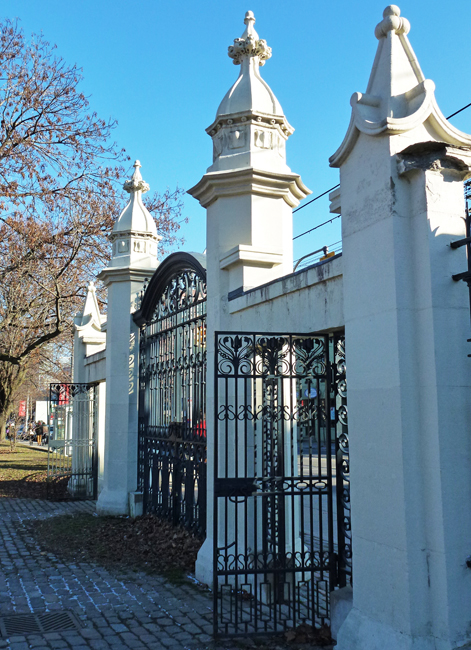 These are the gates to Trinity Bellwoods Park along Queen St W. It is a great park with lots of space for people and is very well used all year long. There are many condos nearby so it becomes a backyard for those living in them.

A Window Of Dolls 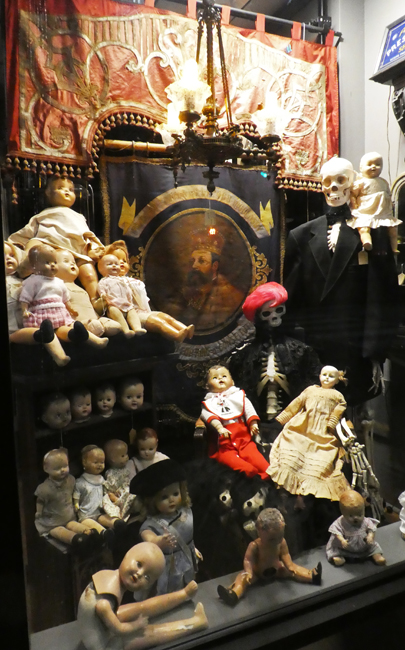 I spotted this shop window with its rather creepy Halloween window. There is something a bit scary about all those dolls and doll heads looking out at you. I first saw it during the day and went back at night to avoid the reflections. 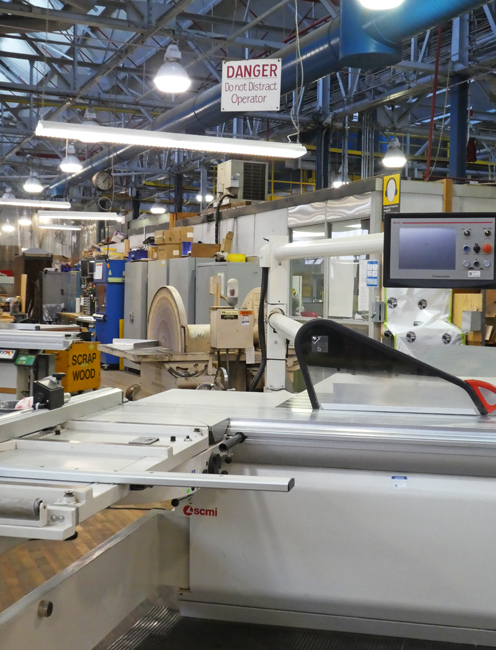 When I was at the open house for the TTC (our transit company) they toured us through all the maintenance and refurbishing areas and this particular space contained huge sanders and saws of many different kinds. I loved the Danger sign warning people not to distract the operator. A good one don't you think? 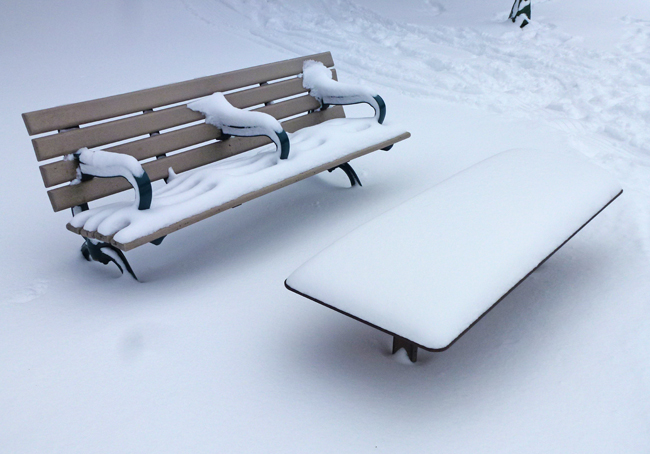 The November theme for the City Daily Photo Blog community is soft and I offer this shot from my archives showing how a gentle snowfall can soften everything it touches. I hope we don't see a scene like this one for at least a couple of months but it does look like a soft place to sit if you were dressed for it.

Taking part in the theme Soft. Click HERE to see more examples of soft from around the world.