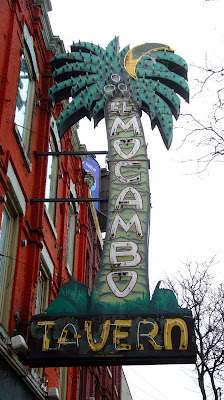 Located on Spadina Ave near the U of Toronto, the "El Mo" opened as a music venue in 1850 and has been an entertainment centre and bar since. With stages on the 1st & 2nd floors it has hosted many major acts such as U2, Elvis Costello, and Jimi Hendrix but its most famous claim to fame was the weekend of March 4,5 1977 when the Rolling Stones booked themselves in as "The Cockroaches" and played their 1st club date in 14 years. These surprise sessions were recorded and were released on the "Love You Live" album. I still remember where I was that weekend and unfortunately it wasn't there!
This sign was erected in 1948 and the El Mo is still going strong.
Taking part in Signs, Signs - for more signs click here.
Posted by RedPat at Wednesday, May 25, 2011

I have never actually been inside The El Mo, yet it seems so much a part of my life. Interesting.

It was so fun to read about this place, except for the part you were not there, of course.
By the way, hope you enjoyed your time too... ;-)

They just don't make signs like that any more! Nice catch.

A great sign for a building with an interesting history.

Whoa! For a moment there I thought you were here in Florida! Interesting building history.

A sign that promises a good time. Sounds a great venue.

I wasn't there, either! This a very cool sign.

Even without the story, I love this sign. It says "party" in capital letters!

Who knew Toronto was so "tropical"! HA
V

Looks like this is a fun place. Thanks for sharing!

They definitely don't make wonderful signs like that anymore ... I wonder if it is lit up at night!

Love that sign. Bet it's cool when it's let up.

Hmmm! More than a century and a half. That's a LONG time for our part of the world!

What a neat spot with so much cool history. Love the sign. It really does have a lot of personality. Sorry be so late commenting, but better late than never. Hope you are having a great weekend. Genie