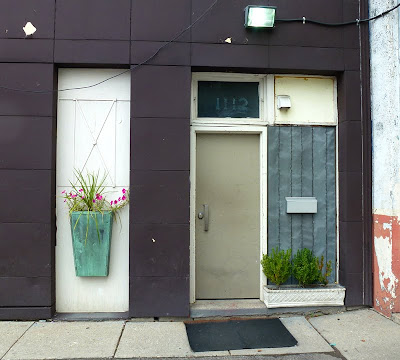 I found this door into a stained glass artist's studio in a rather gritty area of town but I like that they still put an effort into a cool copper planter and a couple of little trees. Maybe that huge light keeps the vandals away!
Posted by RedPat at Friday, September 23, 2011

Artists are often the ones to do the urban trailblazing. They find the down-and-out places that are cheap, fix them up, and then the cool and eventually the mainstream follow. Wouldn't it be good if that happened here?

That cooper planter is great, I want one... A huge light would be needed to fight against cooper thiefs.

Jack's probably right, this gritty part of town might be in the in place in a very few years.
I love how copper turns green with verdigris when it weathers. Thieves probably won't know it's copper, but if that big light is controlled by a motion sensor, they won't hang around long enough to find out.
Very nice choice for a photo. Lots of food for thought here.
— K

Love that planter. The color of the building really sets them off.

That's an interesting entrance way there Red, I think Jack's right, one day this will be 'the cool place' to come for your stained glass art!