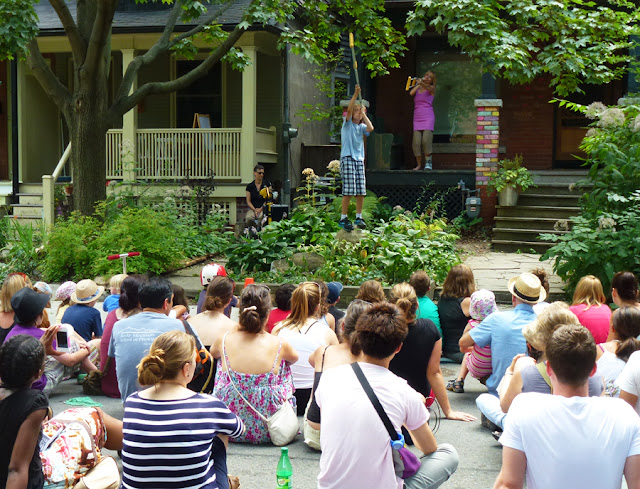 The dance on this porch was titled "Crutch" and started off with the mother wearing  a foot cast and using crutches which became an integral part of the dance that explored the relationship of the mother & son playing, discovering and supporting each other. When I looked through my pics of the event I realized that there were a lot more than 100 people at this performance and apparently they had an attendance of over 1000 for the 5 sessions. The people in this shot and the many more that you can't see are sitting in the middle of the busiest street in the neighbourhood - I love it! Here's hoping this event returns next year.
Posted by RedPat at Sunday, July 29, 2012

It's beautiful to see all this people together enjoying the moment, sitting in the middle of the street. I wish we had something similar around here... ;-)

I hope this does return next year - it sounds very successful. I also hope it doesn't get too big.

This suburb you are living in is so full of art and wonder.

A great capture of the life of the local community

Absolutely incredible. If you have suggested such an event, I would have said you were crazy, that it would never work, people would not attend, blah, blah, blah! I'm so glad I would have been wrong. I'm still amazed!

With that kind of turnout they can't not have it again. Love the concept!

This really is such an amazing event. What fun to follow through your lens

This really is the most clever concept. It sort of reminds me of a play I saw in Chicago when I was working there. It was staged in an old factory and instead of one stage, the different acts took place in different rooms of the factory building and the audience moved from room to room. I thought it was fantastic.

Wow they really drew a crowd.

The seating kinda 'hard' to get used to I bet.

What an amazing idea, Pat!

What childhood memories this and the next couple of shots brings back to me. Each summer when my cousin would visit she would get us kids all involved in putting on a show for the neighborhood. Tickets were just a nickel if I recall correctly and every family member had a part to play. We didn't have a porch but our long drive was the seating and the garage the stage.

How wonderful that it was so well attended!

Brilliant series on the Porch View Dances Pat, such a unique and by the looks of it very popular concept! I liked the idea of the 'air show' last post.

That's a really cool concept, Pat! Lovely photo to share the idea too.