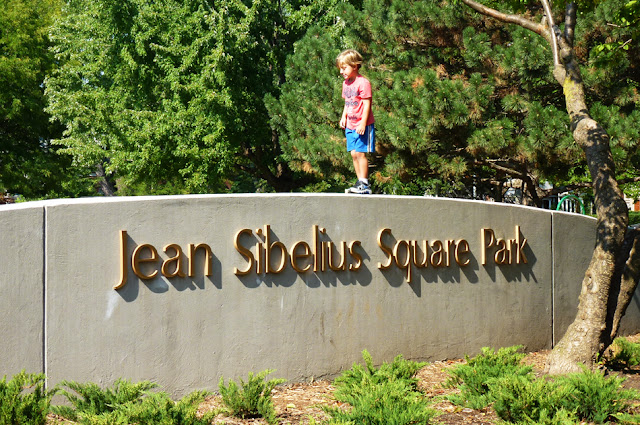 Jean Sibelius Square Park is a small (about 1 acre) park in the middle of the Annex that has just undergone a few $100,000s worth of renewal including fancy climbing structures and climbing walls but the concrete wall with the park's name seems to be a popular balance beam for the kids. Just goes to prove that sometimes simple is better! The park is over 100 years old and in 1956 was renamed after John Sibelius following lobbying by the Toronto Finnish community.
Taking part in Signs, Signs. Click here for more signs.
Posted by RedPat at Wednesday, September 12, 2012

Nice catch! That wall would look tempting to kids of all ages!

I'm glad to see the park is well maintained.

that is a nice, impressive sign for a small park.

Glad the park is being used by kids to explore their world a little.

Is that your child?

The name, "Sibelius," sounded so familiar and when you mentioned Finnish it all came to me.

What a nice park, esp. for kiddos. But you're right, we kids often take the simplest way which is usually higher, more dangerous and more fun!

Not something I would have expected to find in TO. FWIW, Sibelius is on my list of top 10 composers.

Isn't it funny how sometimes the most simple things (liked wall) become the most popular? :)

Oh to be young again.

That is such a great picture and so true about simpler is better...you know that the kids have so much more feeling of freedom and accomplishment walking on this than "where they're supposed to."

A great location for the Park.

they could have saved a lot of money...
nice pic.

At least it is not too far to fall! My grandson would probably do the same thing.

Seems like a nice part and what an impressive signage. Balance beams and monkey bars - they are definitely magnets to children!

I completely agree with you that Simple is better. I have seen some very expensive new playgrounds around here with hardly any kids on them, and yet elsewhere you see kids on littered empty parcels entertaining themselves with nothing.

This reminds me of the kids on Christmas who end up playing with the box instead of the toy that was inside. You are so right, simple is better.

What a marvellous capture.

I wonder if there's a Mum on the other side of that wall getting ready 'just in case' haha!