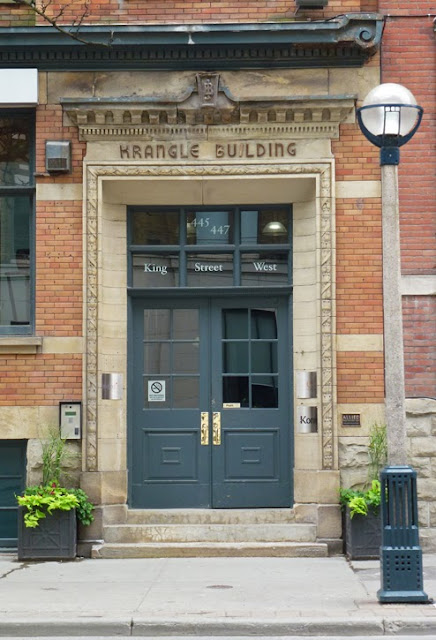 This is another of the elegant doorways to be found along King St W in the stretch between Spadina & Bathurst, a previously industrial area that is now filled with high-end clubs, offices and restaurants. This building was constructed in 1906 as a factory for a ladies clothing company and is now heritage-listed and was totally renovated in 2000 to begin its new life.
Posted by RedPat at Saturday, August 03, 2013

The old buildings look so regal no matter they housed. A pretty impressive facade for a factory.

some pretty detail, there.

I love the detail to it.

You keep finding interesting old buildings for us, RedPat.

It has a solid look to it.

And I'll bet that folks who live there are proud to note their address of "King St W"!

Fancy door. I'm wondering about thne name though. Were they trying to combine Kresge and Wrangle? :)

Wonderful, reminds me of Gotham City!

I like it Pat, this shot would have fitted the theme day too :)

I enjoy seeing decaying area given a new lease on life.

As the daughter of one of the former owners of this building, when it housed Riviera Slacks and before that Krantex, I can tell you that the name Krangle is not a combination of any other names. Rather, it is the last name of my grandfather and the founder of those businesses, William Krangle.

I lived in the Krangle Building from 1996-2000; it had been largely vacant,
along with a number of former garment factories in the area when a young
entrepeneur rented the top two floors and then advertised it as raw space
in Now magazine.

Those of us who answered the ad rented chunks of the space from the "sublord"
and built our own demising walls, ran our own electrical and plumbing, including
cutting in to the main sewer stack...usually at night in order to avoid pesky inspectors, permits, etc.

"Grey Market Lofts" were a thing back then...the building was zoned commercial, so the subtenants
mostly used fake, vague-sounding business names on the subleases and installed showers,
not tubs, all in order to convince Inspectors (if they came around) that the space was being used as Office Space.

The tenants were mostly artists, national ballet school students, models, photographers and it was quite bohemian.

The guys down the hall had an afterparty for The Hip after a tour-opening concert at ACC and ran a mixed medium
performance event every few weeks, the sort of thing that some might have considered a "booze can"...they'd have hundreds
of people there but only had one small bathroom, so instead of a fake business name on my door I switched to a
Womens Washroom sign and a doorbell, which made my spacious bathroom (with its own view of the CN Tower from the throne)
quite popular on Saturday nights.

I had about 1500 sq feet and paid $625/month, heat and light included, which even back then was a very sweet deal.

Corenti's Cigars was next door, where they hand-rolled Cubans, and the old
Spadina Hotel (Global Village Backpackers) was always full of interesting
young people from around the world.

The Amsterdam brew pub and Ace Bakery were just up the street...it was a great neighborhood.

The Mark Wahlburg/Chow Yun-Fat movie "The Corruptor" was filmed in and around the building, with the alley hosting a gun fight,
the front facade playing a police station and a grocery and it was even fake exploded.