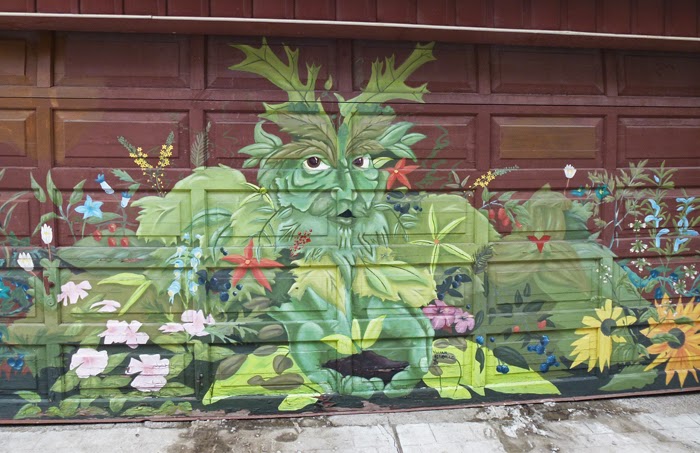 I'm back on Croft St which is really a laneway lined mostly with garages but also with interesting laneway houses sprinkled in amongst them. I love this mural which looks like nature and its garden - really looks like Father Nature rather than Mother don't you think? It is painted on one of the garages across from a house I will show you later this week.
Taking part in Monday Murals. Click HERE to see more murals from around the world.
Posted by RedPat at Monday, March 16, 2015

I like the little green man! Tom The Backroads Traveller

That face is creepy. Better without it?

Oh, this is really a nice one !

I love that "green man" face. I have a friend who collects "green men.

The whimsy is fantastic!

i loved it all but not the face! eek!

Yep it does, and he looks like quite a force of nature!

A refined mural, the author probably knows a thing or two about Arcimboldo...

It looks a bit like the carved 'green men' we find in churches over here.

If I could this would be the choice for my garage door.

Brilliant. In a way it reminds me of Arcimboldo!

This one is pretty cool! Love it!

How fun to paint a mural on a garage. Gives me ideas. Yes, it does look like Father Nature. But, then maybe Mother Nature never care for moisturizer.

That is a nice one!

I love this one!

This is definitely a Green Man. Love his fern frond horns. Thanks for contributing to this week's Monday Mural.

Hi RedPat, and others:

I'm the owner of the garage on which this is painted.

As some of you have guessed, this is indeed a Green Man. In addition to the face, note the pair of hands emerging from the green below the face, holding a small clump of earth with a sapling in it.

I thought I'd share the story of how he ended up on our garage.

In the mid-2000s, residents in the neighbourhood (Borden, Lippincott, and Croft) were involved in an experiment to make the laneways more welcoming and to reduce crime. As part of this - and to get rid of the many tags in the laneway - volunteers repainted all garage doors, at no cost, with the homeowner's choice of beige or brown.

A third option was to have a student paint a mural - for little more than the cost of materials. We decided on this option and worked with Scott Mills, a local police officer who does a lot of community outreach with young people, to find an artist.

The first person Scott found wasn't interested. Then he introduced us to Viviana Astudillo.

My wife and I had been to the UK earlier in the year, and had seen many examples of the Green Man. Have a read through the Wiki entry on the Green Man to get an idea of just how old and universal a symbol he is:

My wife and I realized he would be perfect to watch over our garden, located on the far side of the garage. So we said to Viviana, "We'd like a Green Man but we're open to what he will look like. Why don't you google him, look at the images, and come up with an idea for us?” (Try it yourself to see just how many variations there are.)

Viviana came back with a pencil sketch, and her idea was brilliant. Now he's the best part:

Viviana was 15 years old when she painted this.

She worked at it a little bit each day, most days, over the summer. She was always accompanied by family and friends, to keep her company and watch over her (it was a laneway, after all) - and they often helped out, too.

Each time we thought it was finished, Viviana would tell us she'd thought of something else she wanted to add. Close inspection will reveal many different flowers and berries - but also a bee and a ladybug.

Viviana has done a lot of outdoor murals in the city - many of which can be found on her blog:

We're proud that this was her first outdoor commission - and yes, in addition to the paint we paid her (via her mother) something for her art because talent and effort should be rewarded.

We love seeing this mural every time we go in and out of the garage, and we’re so glad that we were able to play a part in fostering Viviana’s talents.