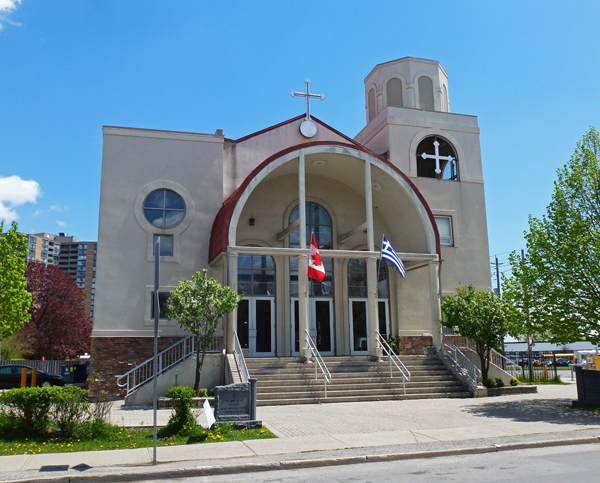 This is Sts Constantine and Helen Greek Orthodox Church taken last week on a warmish day with many leaves finally showing on the trees. Even the wind almost cooperated to give the Canadian and Greek flags a lift but it is hard to catch two flags at the same time! I couldn't find out why there were two saint's names honoured.
Taking part in Inspired Sunday. Click HERE to see more religious buildings from around the world.
Posted by RedPat at Sunday, May 22, 2016

In a few weeks a local Greek festive will be held, it's always a fun time.

I like the light coloured facade Pat, often Greek churches can be a bit dark and imposing looking!

Good morning, pretty church, I like the design. Happy Sunday, enjoy your day and week ahead!

Very inspiring! What a gorgeous day it is too!

That is a beautiful church. I wonder if the name marks the union of two older parishes.

That's quite attractive although different from other Greek Orthodox churches I've seen. Don't know about the two saints. Maybe it's a way of hedging bets. If we name the church for two saints, we'll gain a little extra credit in heaven? Maybe?

Orthodox churches are so interesting. I need to find a cool one in some future travels.

Because I live in Israel, I can explain about the two saints in the church's name. Constantine and Helen share the same feast day and the same icon.
He was emperor of the western Roman Empire and she was his mother. He had a vision on the battlefield, decided to follow Christ, and made Christianity the official religion of the Roman Empire. This was in the 4th century.
His mother, Queen Helene, made a pilgrimage to Jerusalem. Here she discovered "the true cross" and on that spot built the Church of the Holy Sepulchre. She found many other holy places and had churches erected, on the Mount of Olives and in the city.
So this pair of saints is well known in Jerusalem, by Jews, Christians, and Moslems alike. Helene HaMalka has a street named for her.
The two of them really changed the world and also the face of Jerusalem.

The building does have a Greek look to it. Those flags would have been stretched straight here this weekend. We've had three days of lots of wind.

Don't know how you manage to find an interesting church every Sunday. This is a great looking building.

Kind of nice modern church, isn't it? And I laughed about your flag comments . . . whenever possible I try to photograph flags that are unfurled, and it is a madding thing to do. (Dina's comment is informative.)

Interesting architecture for a church !