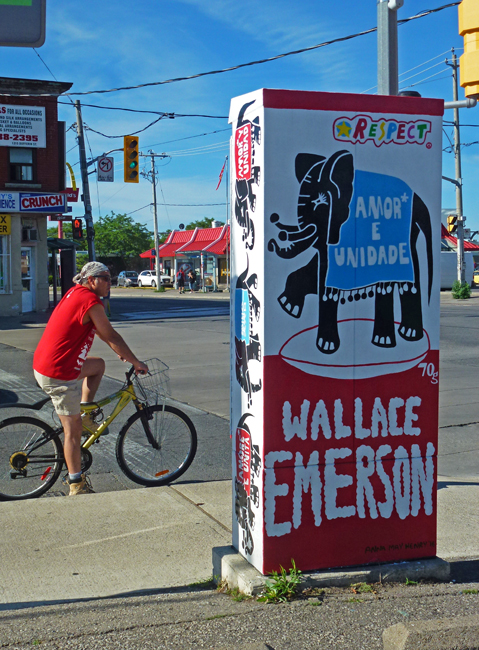 I spotted this utility box and quickly pulled over and was lucky enough for the guy in the red shirt to get stopped by a red light. Wallace Emerson is this neighborhood and the lettering on the elephant's blanket means Love & Unity. It is in English on the other side but then we get no guy in a red shirt. This whole image reminds me of something but I can't figure it out - and ideas? The artist for this is Anna May Henry.
Taking part in Monday Murals. Click HERE to see more murals from around the world. I hope the linky is working this week.
Posted by RedPat at Monday, August 08, 2016

At first I thought it was a political ad and went, "Oh, no!" But, seeing as that is not the case, it's rather nice and I do like the photo with the guy with the red shirt. Hey, that could be a great short story - The Guy in the Red Shirt." Who is he, where did he come from, what's he doing there, did he steal the bike, etc." OK, you take it from there... :)

Nice addition to the corner.

I don't know what it reminds you of, but I love this image. You were lucky to get the cyclist in his red shirt. He definitely adds something!

Another great utility box! Love the guy in the red shirt. You were lucky to catch him too.

I like the utility box all dazzled up! Maybe the cyclist is an utility worker doing a drive-by check with his electronic gadget :)

Very nice capture indeed, and what a fun neighborhood you have!

Reminds me of the box of popcorn you got at the circus.

Fine photo of the utility box and red shirt guy. I saw the circus elephants, and thought it is sad that almost no circuses have elephants any more. Ringling Brothers Circus now has no elephants.

Oh my! You have forgot Pink Elephant Popcorn? It even came with a prize inside. Anyway, nice photo and it was smart to include the guy in red.

wonder why the circus elephant?

You got a good shot with that red shirt!

Neat shot! I recognized it as a box of popcorn right away.

Isn't it irritating when you can't get the thought that you want?! Sorry, I can't help you on this one - but it is, as others have said, a great shot.

Who wouldn't want to live in a neighborhood that describes itself as "love and unity." Most excellent. Thanks for contributing to this week's Monday Mural.