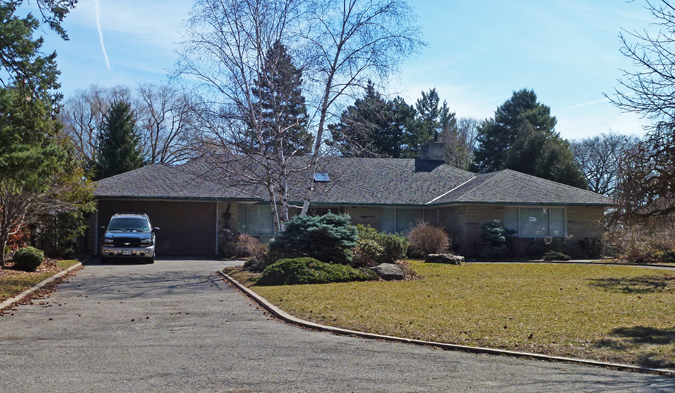 In the older suburbs that are now part of the city it was once common to find street after street of these wonderful Ranch style homes on large lots, particularly in some areas of Etobicoke. Unfortunately the trend now is for someone to purchase one, tear it down, and build a huge megamansion as I will show you tomorrow. Such a shame to see them disappearing.
Posted by RedPat at Thursday, April 06, 2017

Hello, I would much rather have the ranch style then the mega mansion.
Sad to see them disappearing. Happy Thursday, enjoy your day!

That is tragic. I expect whatever is built on the sites leaves very little vacant space and no expanse of lawn, which will soak up thawing snow and lead to more water runoff and perhaps flooding. That is aside from them being very nice period housing and representing a certain suburban lifestyle.

These ranch homes are very common in central Florida. I think our home would be called a "ranch." We're happy.

Tearing down and building bigger is not necessarily better...
I feature something along the same lines today also!

Oh my gosh, this is happening here too. I live close to an area where it's going on all the time.

This is a terrible trend. These ranch style houses were popular in the 1950s and 60s, but somehow huge houses are now the trend. In the 1950s the average family size was over four people, now it is just over two, but the size of houses has doubled. It makes no sense. It is just conspicuous consumption.

I'm reminded of the area in Streetsville, Mississauga, where my aunt and uncle live. Many of the houses in their vicinity are like this, including their own. Unfortunately you don't have to travel far from there to see the endless tracts of five designs, over and over again, on lots far too small for the house.

New people come in with their new ideas and before you know it everything has changed. It's nice that you have documented some of the changes you see.

We used to love the outside of our homes, now we just love the inside! Big mega mansions popping up everywhere. Nasty.
Near me, a ranch style house was knocked down and five, yes five, houses were built on the lot.

It is happening some here too. I like the ranch homes.

I know, we have just that lovely (not that old of ranch style house) up the road from us, they tore it down and they're building a mega mansion on it.

We have similar styles over here.... Probably built back in 1975-1985.
Perhaps we took after the American style.
Probably very nice, and it looks like they have a big garden on both sides.