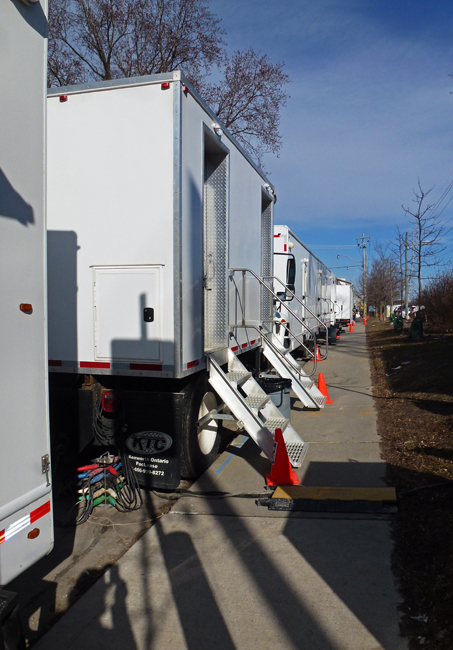 This is a common sight all over Toronto but they usually stay in one location for only a few days. This caravan of dressing rooms and service vehicles was parked here for a couple of weeks with little action during the day so I think they must have been filming in a nearby college in the after hours. I never could find any indication what the film or TV show was.
Posted by RedPat at Sunday, March 11, 2018

When I was working in Chicago, this was also a common sight there. One time the trailers were parked along a street to the side of the building where I lived. The funny thing was, they only seemed to be filming at night. Luckily, the name of the movie, the director and some of the cast were listed on one of the truck doors. It was lucky because the movie never made it to theatre release. I ended up finding it on video. Who knows why because it was pretty good and with a really good cast. When I finally saw the movie, all the night shooting finally made sense.

Oooh that's intriguing Pat, you will have to do some investigating!

Usually, you can find someone who will tell you what it's all about and let you in to watch them work on the various takes. I love the whole process and if I had to do it again, I might try to work in that arena in one way or another.

Your tax dollars at work.

From time to time we have movie or television shoots here, but not as much as it is there.

Neat! They were filming in downtown Calgary the other day. Always neat to see a place that is recognizable in tv or film.

big mysterious production. You'll need to go undercover Pat and get us the scoop. :)

That's kind of frustrating to know there's a movie or TV show being shot nearby but not knowing what it is. We have watched filming a few times in various places when we traveled and always try to find the movie when it comes out. Once when we were staying near San Diego we watched scenes being filmed on the beach for over two weeks. We didn't watch for the whole time (LOL), but every time we went to the beach during that time filming was going on. We'd see the extras and bit part people going into their trailers like these you show (the stars were guarded and evidently had some kind of private access). So the movie came out eventually and we watched it and the scenes on the beach lasted about 5 minutes on screen. (All that time, all those people, all that money ....). Crazy. (the movie was about skateboarding and how it had its origins in ocean surfing before somebody thought to take it to the sidewalk).

They say the movie business is doing well in T.O.

Interesting! It's amazing how they can keep the making of movies so secret, but I know extras, are often sworn to secrecy or they will be let go!