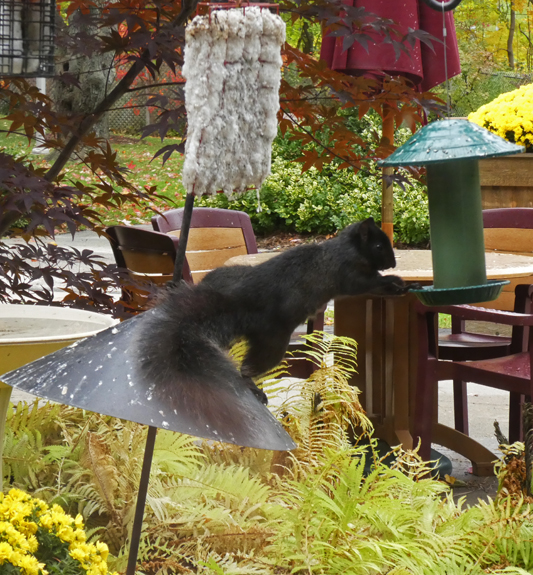 I took this pic at the Sunnybrook Health Sciences Centre in the Veterans Centre garden. They have installed these funnels on all of the poles holding the bird feeders to try to stop the squirrels from eating all of the bird seed. As you can see, it doesn't always work. This squirrel jumped up onto the bird bath that you can see a bit of in the left background and then leaped over to the pole above the funnel and then could reach the bird feeder while hanging onto the pole with a back foot.
Taking part in Saturday's Critters. Click HERE to see more creatures from around the world.
Posted by RedPat at Saturday, January 12, 2019

They are enterprising creatures!

You have to admire their resourcefulness.

They see a problem, they put some thought to it, and they solve the problem. Very clever!

I made cones like that for my bird feeder and the secret was mounting it loose at the top so it would just become vertical if the squirrel put their weight on it. Squirrels are fun to watch trying to figure out how to reach bird feeders, and they are often successful.

Gorgeous black squirrel! Squirrels find bird food! We bought a squirrel feeder, but they still can't use it. We have a bird food frame framed by an iron mesh. The birds get through, but the squirrels don't. Have a nice weekend

Action Jackson!!! Gotta love it even when exasperated ;)

AND he's wearing his black disguise so as not to be tracked down!

What a little rascal!

Squirrels are so clever.

Hee hee! It takes more than that to stop a squirrel!

You have really squirrels in all colors. Never seen a black one before.

Oh they are clever where food is concerned, well captured Pat 😊

So far my squirrel baffles work. Unfortunately, there is a tree right beside my feeder!
(ツ) from Cottage Country Ontario , ON, Canada!

I love them all, but they do make one's spend on birdseed go up. I have a battery operated feeder, that shakes the squirrels off, if they try to climb / perch on it. The birds love it.
The squirrels timed the battery's depletion rate and while I was recharging the battery, chewed the cable that was holding the feeder on the Shepherd's hook, dropped it about 20' and gorged themselves on the tasty seeds. The feeder still works well, but has a dent in the lid.

Very clever :) Had to laugh at this.

By hook or crook they will fight to the end even if just for one peanut!

LOL, nothing will stop a hungry squirrel. They always find a way.
Still catching up with my commenting. Thanks for linking up and sharing your post. Have a happy day and week ahead.