A Laneway in Little Italy 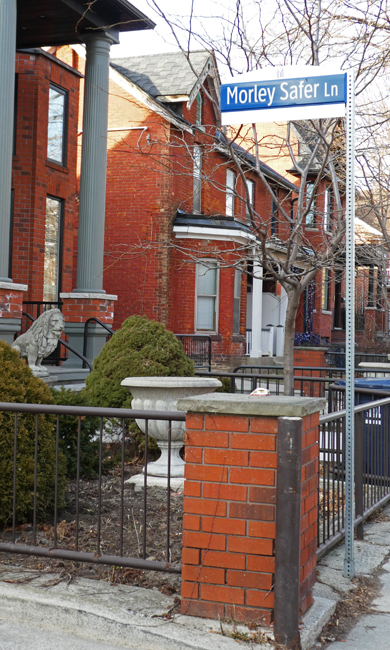 I was wandering around the streets and laneways  of the Little Italy neighbourhood when I happened upon this lane named after Morley Safer. Safer was a long time journalist and was best known for his 46 years on the American TV show 60 Minutes. It turns out that he grew up on Manning Ave, which is where the lane is entered from, and went to the nearby schools including Harbord Collegiate.

I didn't know he had Canadian roots.

I remember Morely Safer! I grew up hearing his voice! I didn't know he was Canadian. He had a great career.

Beautiful lion statue on the stairs.

A pretty neighborhood with an interesting bit of history!
Have a blessed day!

Ah yes, I remember Morley Safer fondly. I had no idea where he was from, so I am happy this Lane was named for him.

...Morley Safer was always a favorite of mine. Interesting history and I thank you for sharing. Take Care.

I remember Morely Safer, I used to watch 60 minutes.

I never knew. Thanks, Pat

Nice that he is remembered.

Interesting. Melbourne has an AC/DC Lane. :)

I sadly don´t know him. But we do have a street named after "me" .... Colleagues used to tease me when we went there for lunch. Bahhh, ooold joke!

I remember Morley Safer, thanks for sharing the history. Take care, have a great day!

That must have been a rare famous journalist.

Interesting. I remember him. I can't thing of anyone else named Morley.

So interesting he's always been like a household name. This is very cool.