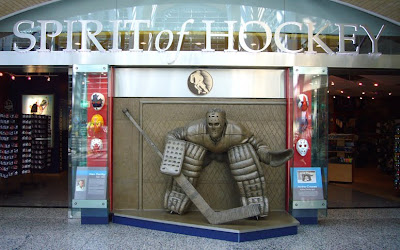 Hockey seems to be our national passion in Canada and today's 7th game of the Stanley Cup playoffs is the 1st story on every newscast and the front page highlight of every newspaper since we actually have a Canadian team (Vancouver Canucks) in the finals! The "Spirit Of Hockey" is the retail store of the Hockey Hall Of Fame which is located in one of the heritage buildings in Brookfield Place (from yesterday's post). This sculpture of a goalie is a tribute to the iconic painting "At The Crease" by Canadian artist Ken Danby.
Taking part in Signs, Signs. For more signs click here.
Posted by RedPat at Wednesday, June 15, 2011

Minnesota thinks it is the "State of Hockey," and there is a U. S. Hall of Fame too.

Pretty cool sculpture! I'm really not that big of a hockey fan, but I am interested in seeing how the playoffs end. I have a lot of Canadian friends who, I am sure, are sitting on the edge of their seats!

goodluck to both canucks and bruins. may teh best team wins the cup.

The statue of the goalie is impressive, indeed, and reminds me that the key to winning or losing can be the goalie. As a Canadian, it was perplexing to see the same player from the Canuck’s team do so well in Vancouver and so poorly in Boston. Yes … we will be hanging onto our seats in Vancouver!

I'm a nervous wreck. I might live in Alberta, but I'm from Vancouver, and have seen the Canucks reach the finals twice before, in the 80s and in the 90s.
Yes, all little boys on frozen ponds in Canadian winters dream of playing in Game 7 of the Stanley Cup Final, but not all fans dream of it. Some of us with nervous tummies get dizzy at the thought.
I'm glad my husband is home. If I were alone, I wouldn't be able to watch. That's the problem with emotional attachment to a team.
— K

Kay, Alberta, Canada
An Unfittie's Guide to Adventurous Travel
PS — my verification word here is "loost" which is obviously "lost" with an extra O.

That's a great sign. I'm not a hockey fan but it is an exciting game.

The excitement seems to be reaching its zenith, just the whistle to go now. Great sculpture, really captures the moment.

Fantastic sculpture!
Every time I watch the news or some movie and I see hockey players I wonder it must be a very fun sport! ;-)

I am not particularly a hockey fan, though I understand there are more Canadians playing for the Bruins than the Canucks. Good choice for today!

What else could you have at the entrance.
These playoffs have gone on too long.

I one time I watch hockey game, wow, they get physical, hitting each other too. But I am impressed how good they play. ^_^

i've never seen a hockey game except in the movies. the goalie looks menacing.:p

fun!
I always feel for the goalie. The sculpture conveys the spirit of the game well.

Terrific sculpture which captures the action of the goalie. Sorry Vancover didn't win yesterday, but I'm delighted that the Bruins captured the Stanley Cup after so many years. Gotta pass it around!

Hockey has a big following in the midwest. Go Canucks! I like that sculpture.

To bad about the aftermath of the game - those hooligans have no idea about the true "spirit of hockey" or any other sport for that matter.

Being a former Vancouverite, I am aghast at the bad behaviour of [some of] the fans of the losers. What happened to sportsmanship?

You later posts are very cool!