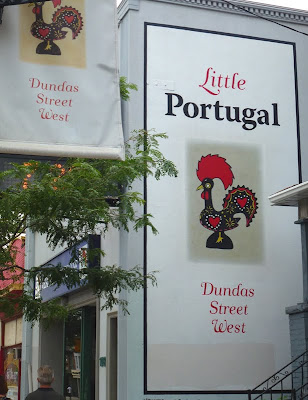 I went wandering along Dundas St West, which is the heart of our Little Portugal, where you will find all kinds of Portuguese bakeries, cafes, and shops and spotted this very clean mural which replicates the art work from the banners which are are on lampposts throughout the area. You can see part of one of these in the upper left. We have a very large Portuguese population in Toronto which is well served along this street! Perhaps someone can tell us why the rooster is the national symbol of Portugal - I found several versions of the story.
Taking part in Signs, Signs. For more signs click here.
Posted by RedPat at Wednesday, August 24, 2011

I rally like living in the country but when I see posts like this I wish I spent more time in the city soaking in the many cultures there!

Wonderful. We enjoyed our brief visit to Portugal a few years ago. I don't know why the rooster, however.
— K

I don't know the answer to the question but, I do like this rooster!

If you have the opportunity you should visit this amazing country, beautiful places, very friendly people, delicious food, Porto wine...
Brazil was discovered/colonized by Portugal, so their culture has a big influence here too.
http://en.wikipedia.org/wiki/Rooster_of_Barcelos

Interesting, Portugal is wonderful, I don't remember seeing any roosters there though,,,M

I LOVE the rooster poster! It's very eclectic looking!

Chianti has a symbol much like this one, and it is a black rooster. I have already forgotten the reason for the Chianti symbol. (Never knew about Portugal . . . sorry.)

You had me at "bakeries'! Yum

I love that Portugese cock. :)

Can't help you with that either Red, but I hope Portuguese food is good because we're going to a Portuguese restaurant tomorrow night!

I really wasn't expecting this, what a surprise! :-)
There are several versions but this is the most common, I guess:

The inhabitants of Barcelos (northern Portugal) were very perturbed by a crime of which it had not been possible to discover the author. One day, however, there appeared a man from Galicia who was suspected of having committed it. He was arrested and, no withstanding protestations of innocence, nobody believed him, when he said that he was in his way to S. Tiago de Compostela to fulfil a vow; that he was a fervent devote of that saint who in Compostela was venerated on a par with St. Paul and Our Lady. And. So he was condemned to be banged. But before the execution, he asked to be taken to the presence of the judge who had pronounced the sentence.
His request was granted, and they took him to the house of the magistrate, who was dining with some friends. The Galician once again protested his innocence, and to the amazement of those present pointed to a roast chicken on the table and exclaimed: "As surely as I am innocent will that cock crow if I am banged!" There was an outburst of laughter and comments, but in the end nobody touched the cock.
And what seemed impossible actually happened. When the pilgrim was being hanged, the cock stood up on the table and crowed. No one any longer doubted the innocence of the condemned man. The judge rushed to the gallows and horrified saw the wretched man with the rope round his neck, but the knot was caught and this prevented him from being strangled. He was immediately released and sent on his way in peace. Years later, he returned to Barcelos and built the monument to the Virgin and St. James (San Tiago).

After the 3th/4Th Décade of the 20th century, through the agency of António Ferro, director of propaganda for the Estado Novo Fascist Regime, the Galo de Barcelos achieved fame and became an icon of Portuguese culture.

Thanks JM for the answer. I also search it in the internet and it has the same story. Now I knew why rooster is the national symbol of Portugal.
Signs

I just knew there had to some fanciful death defying tale with that rooster. he is nice looking!

That's a very appealing rooster design, and thanks to JM for the backgrounder!