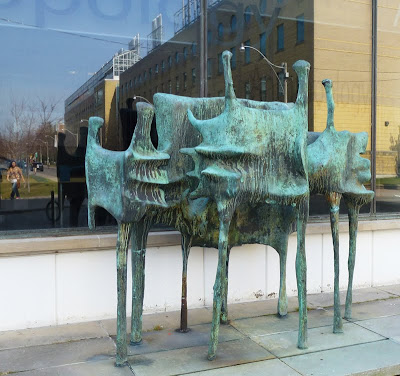 This abstract, cast bronze piece titled "Cedars" by Canadian artist Walter Yarwood was done in 1962 and sits outside the Anthropology building at U of Toronto. Yarwood said that it was inspired by a cedar grove he played in as a child with all its hidden areas between the branches. He was the same artist who did the Coca-Cola sculpture that I showed you a few weeks ago and was part of the "Painters Eleven" group of abstract painters in the 1950s before turning to sculpture in the 60s. I knew Walter in the 70s & 80s and he was a gentle artist and a nice man!
The reflected building is the Earth Sciences Centre of the university - a post modern building from the late 80s which still works.
Posted by RedPat at Saturday, March 24, 2012

Labels: artist, sculpture, U of T

I like the shape of this but it looks more like a boney animal with many legs to me. I hope Walter Yarwood will forgive me.

I think I can see the cedar grove, but I tend to agree with EG! :-)

Hang in there, I'll settle down at some point!

Nice to see this sculpture in relaton to it's surroundings. It seems very close one of the buildings which is presumably intentional.

It has developed a lovely patina.

Art on the streets in a beautiful sunny day. ;-)

I can see cedar in one area, love the patina and reflection!

Wow, fabulous, I see the cedars and soooo much more. How fabulous you knew the artist. I am sure you have some great stories.

Cedars? I like the form, but I still working on seeing it as cedars.

I must be missing something - cedars are the last thing that comes to mind seeing this.

I'm not sure I see cedars in this piece but, it is interesting.

I'm glad you gave a little commentary on this piece. I wouldn't have gotten cedars from that. :)

This piece looks so familiar... Maybe I remember something... later! :-)

Nice reflection. The sculpture reminds me of some sculptures we have around in Melbourne. Very 60s in look.

I'm not sure if I see the cedars either Pat, but you know what, it's so unusual and the patina is a delight that it doesn't really matter. Looks great in front of your reflections.