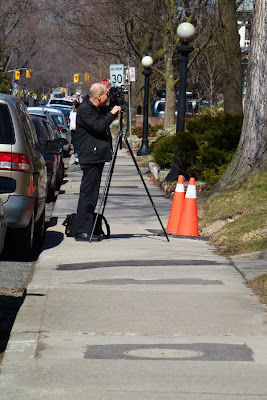 I went for a walk to shoot some pics of the houses along Palmerston Blvd which have some of the laneway buildings behind them - the ones I showed you a few weeks ago. As I wandered along I spotted this photographer who was really into shooting the same houses. It turns out he is an artist working on a project of taking shots of classic porches and he is planning a show of them in the future. He already has over 700 images to choose from!
In the pic you can also see the single pole-top lamps which line Palmerston Blvd. Originally installed in the 1910s, they were refurbished and renewed in 2005 and this remains one of the few streets in Toronto with this type of lamp.
Posted by RedPat at Saturday, March 31, 2012

Cool find RedPat! I'd love to take many shots in this place too! ;-)

I'm going to start carrying around a couple of orange pylons. They really give an air of authority. :-)

I wondered at the pylons myself. And that is some rig he has mounted on the short tripod! Lovely street lamps.

Laughing at Wayne's comment about carrying pylons around. I guess it would take some of the intimidation out of shooting someone's house or porch. I love old lampposts like these.

I wonder if the cones are to give the local dogs a target other than his tripod legs! That would certainly be his biggest problem if he tried photgraphing porches around here...

Well, RedPat, it appears that you weren't the only one planning to record these houses for posterity. It would be fun seeing his show. I am a fan of porches.

I would love to see that show. He does look rather professional with his larger than life camera!

That's a lot of porches!

Great shot Pat, I love to shoot the shooter! He's very organized isn't he! Would be great to see how his photos look. Love the single pole-top lamps they look fantastic lining the street.

You know it's serious when there's a tripod.

I love Palmerston Blvd....especially with their pole-top lamps. A family friend sold his 'huge' home a few years back on Palmerston Blvd. I remember memories going there then walking to Honest Ed's.

I wonder if those two orange cones are to keep people from tripping over his tripod? ;-)

It's always fun to take pics of other photographers! Love those pole lamps, too, and I think it is great they've been maintained and refurbished and not changed into some new modern meaningless lamp posts.

Quite a different shot from yesterday.

You've captured the artist at work!

That's a LOT of photos to choose from. My head is dizzy just thinking about it. :)

I'm always interested in other photographers who seem to shoot the same things I do. We often strike up a conversation and one meets some very interesting people that way!
Love the lamps!

It is fun to watch other street photographers at work. I used to dream about having a house on Palmerston. But it was just a dream!

It would be interesting to see have his shots have turned out and what he eventually choses for his project. Must be a fascinating boulevard to walk down Pat.