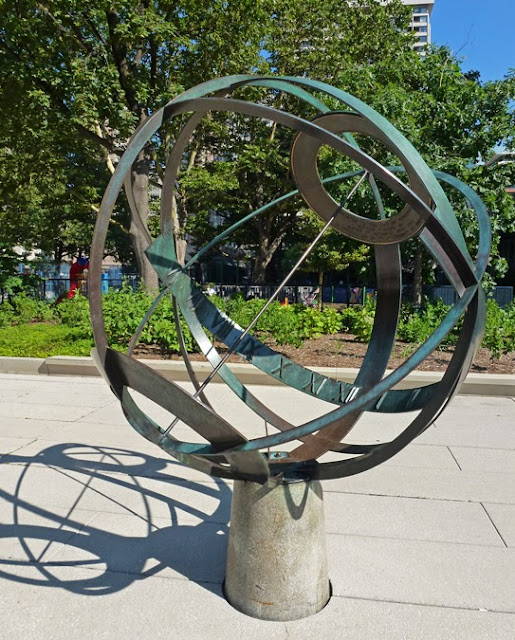 I spotted this sundial on the square in front of City Hall on a recent walk and I was surprised that I had never noticed it before. There are a lot of renovations going on in the square and so it may have been moved to this location (maybe from the peace garden which was removed) but it seems its angle wasn't set properly as it was 1 1/2 hours off the correct time! I could find no artist info.
Posted by RedPat at Tuesday, September 17, 2013

That's about the same amount of time my clock in my car is off. I wish I knew how to fix it.

At least it's a sunny day for the sundial!

Not fixed for daylight saving time?

That's quite elaborate for a sundial!

Looks fun - funny that you noticed it was 1/2 hour off.

I have no idea how you could tell time off this thing. But I like the design the shadows make. :)

My grandfather made this. Fred Caruk. He owned Master Welding Co. based out of Port Credit. He made this in 1984 for the Peace Garden Memorial. A great attribute to his talent and love. R.I.P

According to Wikipedia...
Peace Garden
The Peace Garden was created as a memorial to the atomic bombing of Hiroshima, as well as the "commitment of Torontonians to the principle of world peace."[3] The sundial at the south end of the garden pre-exists the peace memorial; inscribed with the words "In appreciation of the opportunity to serve," it was originally installed in 1969, designed by G.R. Johnson (in consultation with H.H. Rogers and John C. Parkin), and presented by Nathan Phillips to the residents of Toronto. Fifteen years later, during the city's sesquicentennial, then Prime Minister of Canada Pierre Trudeau turned the first sod for the Peace Garden, which was to sit immediately north of, but also incorporate, the pre-existing sundial. The 600 m2 (6,500 sq ft) garden consists of a pavilion, a fountain, and surrounding plantings. The gazebo is a stone-clad cube with arched openings on all sides, capped with a pitched roof, and with one corner of the structure deconstructed, to signify conflict and the fragility of civilization. The fountain's pool encroaches into this removed corner, with an eternal flame placed in the water so as to appear as though it supports the pavilion structure, to symbolise hope and regeneration. Pope John Paul II lit this flame with an ember from the Peace Flame in Hiroshima, and poured into the pool water from the rivers that flow through Nagasaki. The entire monument was formally dedicated by Elizabeth II, Queen of Canada, in October 1984.[7] As part of the redesign of the square, the Peace Garden was moved from the centre of the square to its western edge.[8]

Actually Manuel Da Silva assembled and welded the sundial in 1969 and legend has it that his initials are somewhere on the sundial...

You are correct l. Gaspie. My father Manuel da Silva did work for Master Welding. Master Welding got the contract but, my father was the one who assembled and welded it together when no one else could in his shop. If you look closely you will find his initials on it. The inauguration was April 28th, 1969 for which my father was invited. My father has since passed away may he RIP..