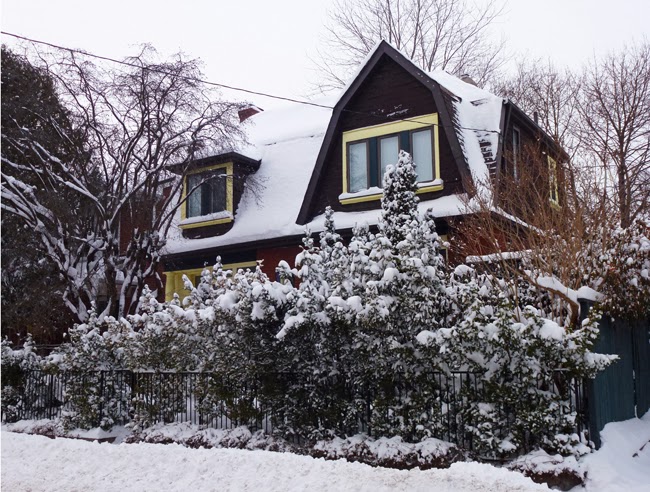 Everything looks so beautiful in the city right after a snowfall and before the snow gets dirty. It's a great time to wander about with a camera!
Posted by RedPat at Thursday, February 13, 2014

As long as you have your gloves on! Very pretty and I bet it's very quiet too.

I would loooove to Pat, looks so pretty!

You are really getting quite the storm, glad to know you are enjoying it by photographing it. Always such a beautiful time to be out and about. The freshness of it all.

that's a pretty place, made even prettier by the fresh snow.

As soon as we can clear enough walkways to allow anyone to get out and about, that's what I'll be about. :-)

The snow does look lovely, especially on that beautiful rooftop!

Dirty city snow isn't pretty! A nice shot, I like the house.

Yes... winter does have beauty and you found it.

You're right, that's the time to get the snow in your lens, before the cars, snowplows, pedestrians, and even snowmen, have ruined it. Lovely shot!
K

Fresh snow covers up a lot of dirt, doesn't it?

I agree that freshly-fallen snow has a certain beauty; kind of like frosting on a cake. Looks like a nice house; I'd say it would cost about $150,000. No?

It's pretty and of course, so silent!

Nice picture ... Yes it's the best time is when a pleasure underfoot;)

Hi Pat! That's rather what I figured! From our point of view, that's ridiculous. What a disparity! But then I know what apartments go for in New York City, so...

Ah lovely, we have had about 5 minutes of sleet this winter. I expect I may regret saying that shortly........

I especially like how the snow stays on the bushes, likes globs of icing.

This is a great house, RedPat. It looks very much like the first house I ever almost bought, in a Boston suburb. I can't remember any more why we didn't get it. But, it worked out just fine. The place we got instead was near Boston College and the route of the Boston Marathon. We sold it six years later for almost three times what we bought it for.

It's like frosting or a bit of icing sugar on everything! (I like the snow hush too:)

... ya till ya have to get out and remove it. hahaha

What a cosy looking little house!