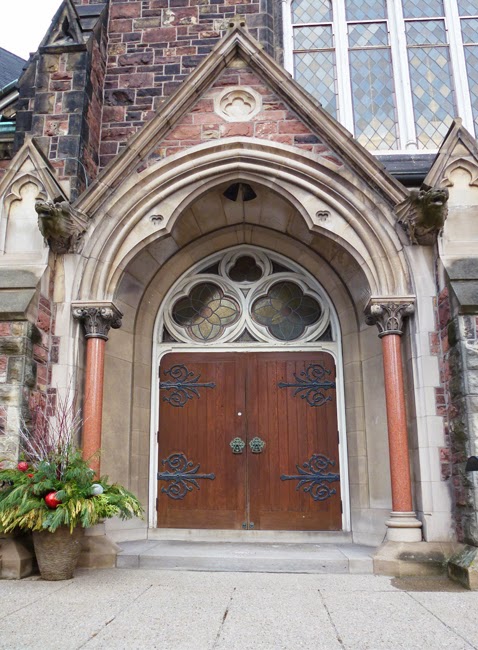 This is one of the side entrances found on the Jarvis Street Baptist Church in downtown Toronto. The Church itself was built in 1875 but this entrance wasn't added until 1939 during a massive renovation of the church. Note the gargoyles on each side of the entrance and the 3 stained glass windows which are found over each of the eight doors leading into the church.
Taking part in the City Daily Photo Theme day. Click here for more entries from around the world.
Posted by RedPat at Saturday, February 01, 2014

This is an absolute beauty and I love the red balls (or are they baubles?) in the big pot!

Goodness me if that 's a side entrance Pat I can only imagine what the main entrance must be like! A very intricate and beautiful door.

Don't find many majestic Baptist churches like this in our area! :) What an incredible entrance, and I love old stone buildings, so...

I almost can't believe this is a side entrance. It's grand enough to be the main entrance.

Great photo for the theme. This door looks more like something from the 1200s than from 1939.

That is a grand entrance!

Nothing like most Baptist churches around here. I love this entry.
V

Wonderful. Those ornate hinges are very similar to the ones at the chapel at Trinity College in Hartford.

Interesting that the later addition is in the style of the original era. Neo-gothic, right?

I'm fascinated that a Baptist church would have gargoyles! That sounds more Anglican to me.

A lovely entrance. Toronto has so many nice "older" churches. I can't call them old anymore now that I live in the land of the old stuff! ;)

lovely stonework and I like the copper spire on your other photo of the church,

I would love to see the inside of the church with a shot of the windows. Gargoyles are a favorite of mine and they go well with the architecture of this period.

You are reminding me of buildings right here in England. Lovely indeed. PS I smile every time I see your 'red shoes' :).

Impressive side door, the hinges and handles are enormous!

Great Photo Pat. I love it!!

The Church "Auditorium: was gutted in a 1938 fire. The building code in 1938 demanded additional exits be added. The architect in 1874 was Edmunde Burke of Langley & Burke. Burke was a member of Jarvis St Baptist and he was a greeter at the N.W. door of the church reportedly for years until he died about 1919. The architects that rebuilt the church were the descendants of Langley and Burke (Horwood & White) and they retained the original drawings and used them to restore the destroyed auditorium. The drawing are now at the Ontario archives and also at the reference library. This church cost $103,000 to build in 1874-75--that was a huge amount for anything other than a Cathedral back then. For comparisons sake, Old St. Andrew's up the street at Jarvis and Carlton cost something like $28,000 in 1878. It was designed by the same architect and it's anything but a cheap building. My understanding is that they were going to build Jarvis St. Baptist exactly as is with the same stone dressings but instead of the Queenston Brownstone that forms the bulk of the masonry, they were intending to use "Toronto Yellow brick" like most other churches before 1874 in Toronto but they changed to Queenston Brownstone at the last minute--I'm sure that upped the price quite a bit and I've always wondered if JSBC was the first (of many) edifices built in Toronto with that stone. There's lots of cut stone (very expensive) and the pews and all woodwork in the church was solid Walnut. Regrettably it was all destroyed in the fire although, some Walnut pews were saved and re-installed in the churches current chapel. It's an extremely interesting building--I've been into every nook and cranny and to this day--interesting things continue to be found or rediscovered. There had always been an old concert Grand Henitzman piano in a Sunday School room. It survived the fire and as far as anyone knew it had always been in the church. It was in deplorable shape and the church was told about 30 years ago it could never be re-built. They got a different opinion a year ago. It was discovered that the piano was one of two that Heintzman had built about 1880 on an experimental basis. It's twin is supposed to have been given to Queen Victoria-- and Jarvis Street ended-up with the other one--but everyone forgot about that until the Piano people came in to give a quote to rebuild it. They were gob-smacked that they had found the "other" Heintzman that had seemingly disappeared. It was rebuilt finally and it's been moved into the Auditorium. The workmanship was absolutely perfect--I went over it with a fine-tooth comb--just amazing.
I could write for a week about the church--but--I gotta get back to work. Thanks for drawing attention to the church--I wish it was still as dressed up as it was intended to be (slate roof, iron illuminate crest work etc,) but that could still happen, they're concentrating on making sure the building remains solid and sound--and it is.