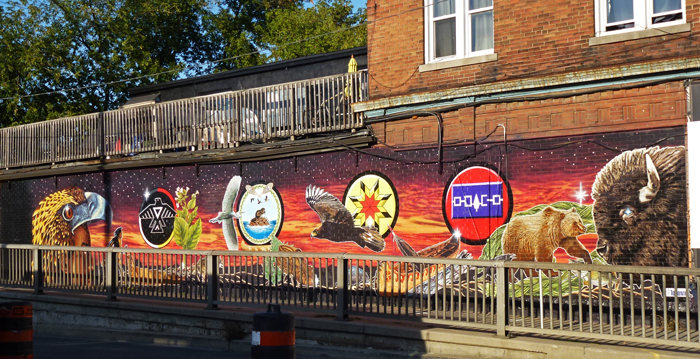 I showed you people working on this mural back in October (HERE) and I did go back to see the final work. The mural on the upper floor turned out to be a fellow painting over a previous mural but the lower one is a beauty. There are so many details in it that I will be showing it to you for the next few days. The mural was designed by Phil Cote and is filled with indigenous symbolism.
Taking part in Monday Murals. Click HERE to see more murals from around the world.
Posted by RedPat at Monday, January 08, 2018

Beautiful! Makes me wish my small town had more art for viewing.

I love how bright it is. It is a real eye catcher.

Hello, I love this mural. The eagles are beautiful. Happy Monday, enjoy your day and new week!

I love it! Have a great week!

love the overall colour. and animals are really beautiful.

It does look like there is a lot of symbolical meaning to this one Pat.. look forward to seeing details.

It certainly is beautifully done!

It must be great for a painter to have a canvas that big.

I can see the indigenous references and I love the colors and I'll look forward to see more of it close-up.

A long way from conception to conclusion. Must be especially gratifying to see the end of your work.

Philip Cote & I designed the Mural. "The History of The Land".

It depicts an Eagle Dancer (It's actually a self-portrait of Philip Cote) looking towards the future and the Return of The Buffalo.

The Ice-Runner is the man running behind the wolf (The Wolf is the First Brother of Man), the Black Thunderbird symbol in the Medicine Wheel Circle is The Symbol of the Anishinaabe People who were the first to inhabit the territory.

Then you will see the Tobacco Plant which is an Important and Sacred Medicine for Ceremony.

The Crane is part of The Anishinaabe Clan System and Governance. Crane Clan – shares power of Chieftainship with the Loon Clan. Crane Clan takes care of leadership of external relations, courage, external negotiations, speaker , leadership and mediation, expresses not their own sentiments, but wishes of the group, connected with Bear and Fish (territory and knowledge keepers).

The Next Symbol with the Beaver is the Symbol of The Wendat People who were the next in the order of inhabiting the territory.

Next we put in an Anishinaabe Moccasin which we found at The Bata Shoe Museum and re-illustrated it here. The Moccasin is on Cedar, Cedar is used as a Medicine, usually as a tea and also used for bathing and cleansing (in Cedar Baths).

The Next Symbol is the Star Symbol of the Cree peoples who came next to the land to live here.

The eagle can travel between the physical world and the spiritual world, and is thus closest to the Creator.

The Beaver is a symbol of advancement and Industry/progress since he is a builder.

Next is the Canoe and Sage. The Sage is another medicine used for smudging and cleansing. The canoe is there because it is a symbol of all the paths the Indigenous People created which are still used to this day, like the humber river trail, and the Don River, etc.

The Next Circle is The flag of the Haudenosaunee People. It represents the Hiawatha wampum belt.

Then we have the Raven (the Trickster), and the Bear.
The Bear is another Clan Animal. Bears are settlement guardians, they patrol the local area; also, they know medicinal plants and are healers, guardians of traditions.

The Bear Stands on a loop of Sweetgrass, another medicine used in Ceremony.

The Bear looks on to the Giant Buffalo. There were once 60,000,000 Buffalo in North America, only to be slaughter by the settlers so they could take the land from the Indigenous Peoples. The Buffalo was vital for the survival of Indigenous People of North America, they used all the parts of the animal, the furs for warmth, the meat for food, etc., nothing was wasted. It was a major food source but was taken away by the murder of the Buffalo by the Colonists. It is said that one day there will be a Return of the Buffalo to this land and territory so they could roam free as they once did here. This is what we all look forward to.

Thank you so much for sharing this lovely mural, and how wonderful that the artist could offer us all the wonderful details and stories behind each symbol!

You couldn't ask for a better explanation of the mural than that provided by the artists. I learned so much about the First Peoples symbolism. Thanks for contributing to this week's Monday Mural.

Nelly - Thanks for all of the wonderful info. I will tell people to come back to read your comment when I show the last part of the mural tomorrow. Thanks again!

Thank You too RedPat for Posting Philip Cote's Mural.

There is another one (a set of 10 Murals) we did Under Old Mill Station (King's Mill Park) & The Humber Treatment Plant (The Waste Water Wall).

We painted this all the past Summer 2017 with Graffiti Artists: Young Jarus, Kwest & Kane. We did the Indigenous Parts depicting The Anishinaabe Creation Story from The Beginning of the Universe until present Day & the did the Graf sections with Fish & Water, etc. Please check it out when you have a chance.