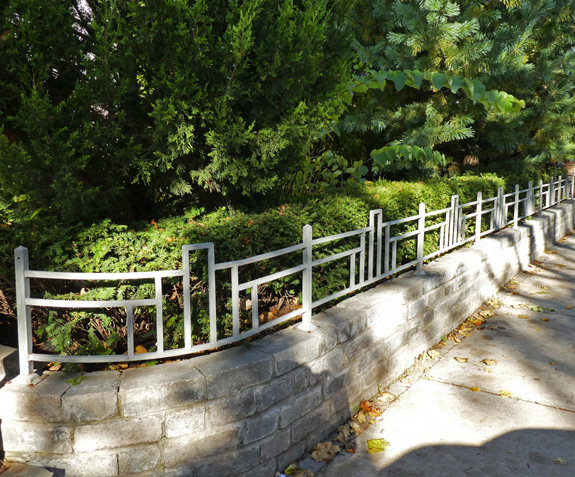 I spotted this little fence in the Annex neighbourhood and liked the fact they went to the trouble of making it a little unusual. And one can never have too much Art Deco flavour around.
Posted by RedPat at Thursday, November 15, 2018

I like the art deco design, very pretty. Enjoy your day, have a great weekend ahead!

You are right, that is a great looking Deco fence.

I think I'm having fence envy.

Very welcoming! It just seems to invite me to turn in there.

I enjoy your blog.

Another great find, Pat! It's a beautifully designed fence. All of it is a work of art, from the stony bricks to the cool curve where it begins. I'm wondering if the design is made to suggest the city's skyline?

Re Harry Truman: He was short, a haberdasher from Kansas and somehow ended up as FDR's vice-president. When Roosevelt died suddenly in 1945, Truman took over amidst a lot of caterwauling as to how he was not strong enough or tough enough or smart enough. Well, he proved most everyone wrong. But it wasn't easy. For many, Roosevelt had achieved god-like status and no one could fill his shoes. Truman, did use the atom bomb on Japan, which was a widely disparaged decision but he defended it on the basis it would have cost the US at least one million lives to invade mainland Japan. The bomb forced Japan's hand and they surrendered almost immediately.

Art deco and a curve too.

I like it too and those shadows are pretty!

Design touches like this can be subtle but such a nice touch!

Nice fences. You first have to design it and and convince the client why it should be that way. The first and highest fence you as designer have to take but the result is very pleasing.

I'm absolutely 100% with you there Pat, what a fabulous discovery here..there is no such thing as too much Art Deco 😀

I agree Art Deco is wonderful and this fence is exceptional too.