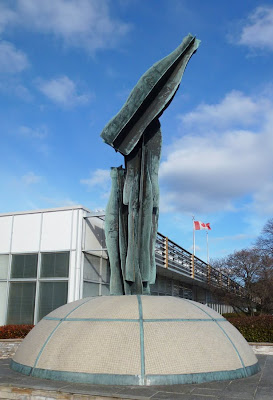 The sculpture visible behind yesterday's sign is appropriately titled "Coca-Cola" and was done by Canadian artist Walter Yarwood in 1964. The sculpture stands 5 M high and consists of intersecting bronze silhouettes mounted on a dome which has the words 'Coca-Cola', 'ice-cold', and 'drink' spelled out in various languages and alphabets on the band around its circumference. Coke is moving from this building and there is an ongoing debate as to whether the sculpture belongs to Coca-Cola or to the community since it has become quite a landmark in the area.
More on the building tomorrow. That is the bottling plant in the background today.
Posted by RedPat at Thursday, March 01, 2012

They have a coke bottle outside their building in Atlanta too. I have a photo of it in my blog. It's much different than this one however.

That could be a sticky problem, for sure. The sculpture has been there a very long time!

Cool!
Nice capture of the flag as well!

Looks like a very nice sculpture and I hope 1) the building isn't left to rot away and 2) the sculpture stays...however, knowing how corporations behave...well...

I hope they leave it; it would be a good 'clue' of the history of the area in years to come.

I like your photo RedPat, nicely done with the flag in the background, but the sculpture leaves me cold even 'ice cold' (sorry!).

Interesting work. I think it only works in front of the Coca Cola building. It would look too commercial anywhere else.

Interesting dilemma. I think Halcyon has a point, it is rather recognizable as a corporate insignia. I personally feel that art, especially art commissioned as a corporate icon, belongs to the company. Something tells me that while jennyfreckles is right about the fact that it would give an interesting clue to the past history of the area, I also think it will end up either being a huh? or more likely removed by tenants that don't feel it is relevant to what they do in the building. Keep us posted.

It would be a good marketing strategy if they leave the sculpture to the community. ;-)

I'm with Deb, it leaves me cold. If they're moving. I say "take it with you"!

Oh, I like this sculpture, coke bottles how appropriate. The only thing is if they are left and the building is sold again the next owner may want to tear them down. The owner I would think has the final say, if it is their property. Then you would have to petition everyone to keep the sculptures. I've seen this happen elsewhere. Danger ahead.

Interesting dilemma! It's a nice sculpture

Without the Coca Cola company there to protect its image, I can see the sculpture easily falling into neglect, which would reflect poorly on Coca Cola. Someone in the Coke PR department should be able to come up with a clever compromise.

Interesting sculpture, which can be seen as an almost abstract structure...
Lovely blue sky behind that, Pat.

PS: Flying fox is a BAT! Will post up some pictures soon.

That is a cool sculpture.

I like the sculpture and I like how you captured the Canadian flag. Have a nice weekend!

If Coca Cola are leaving, the least they can do is leave the sculpture behind.

You've made a very nice photo of a fairly uninspiring subject, Pat. I like the inclusion of the Canadian flag!

I'm not sure Red, I can see both points of view, but lean more towards they should take it with them!