A Bit Of A Mystery 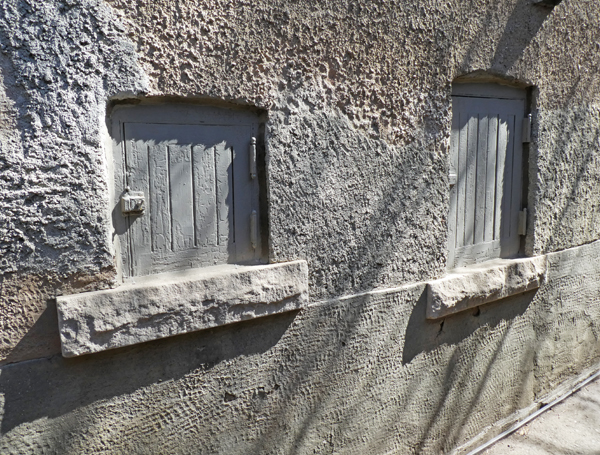 I was walking by an old house and noticed these two little doors in its side wall. I remember seeing milk boxes when I was a kid but I have no idea why this house has two and why the different sizes. Could one have been for milk and the other for bread? Any ideas?

John "By Stargoose And Hanglands" said...

Somehow they look like the kind of feature you'd see in a mountain village in Greece!

Could be Pat, the tall one for milk the shorter for the bread. What a fun discovery 💜


Maybe they had a lot of deliveries of bread, eggs and milk?
Take care, wishing you a great new week!

I go with Tom. Maybe when the milk bottles were empty, they were placed by the smaller window. A precursor to a today's takeaway windows.

I bet one was for ice. I used to see these "ice doors" on homes back in Illinois. My dad explained that there would be a sort of refrigerator box on the other side of the wall. The ice would keep the food in there cool for storage.

I'm with everyone else... milk in bread. They are from a ERA when there was no such thing as porch thieves. :-)

They’re lovely, a mystery for sure,, I’m sure you’ll find the answer, not from me, but someone will know. Maybe a local you could ask? An elder of the neighbourhood ,

They are really interesting hatches.

I've no idea. They don't look like what I'd expect to see in a city. They must be old.

One door might have been to a coal shoot. Coal use to be a common source of heat, and was delivered to houses by dump truck. But this is only a guess.

About a century ago I lived in an old house as a young child where there was a door like that. It was a coal shoot so they could shovel it directly into a room in the basement - in the days of those old coal furnaces.

I'm going with coal chute for one!

It for sure delivers a nice photo.

It's very interesting and you're probably spot on about it being for deliveries!