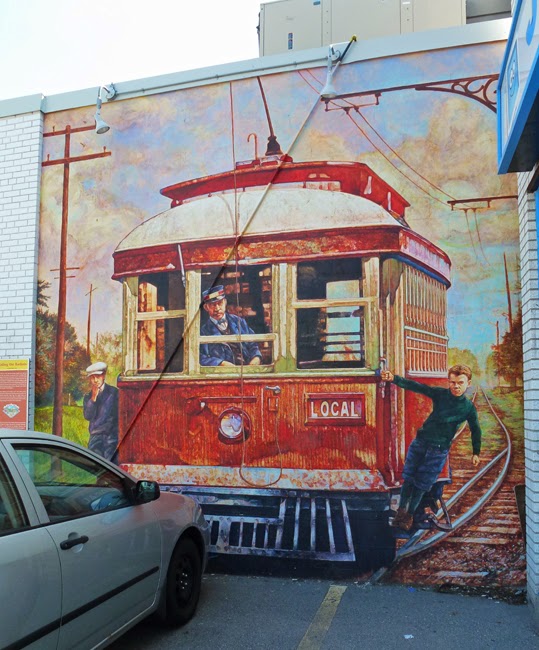 I haven't shown one of the many historical murals from the Islington for quite a while so here is a good one. This is another done by John Kuna who did it in 2007 in a style resembling an old postcard, and it shows an electric train from the old Guelph Radial Line which ran from Toronto out to the city of Guelph from 1917 to 1931. These lines were called radial because they radiated out from the city to the towns and villages around it.
Taking part in Monday Murals. Click here for more murals.
Posted by RedPat at Monday, March 24, 2014

Fabulous! Love the folk hanging off the side!

This is one heck of a mural...looks like that track used to come right where the pavement begins. It's a terrific perspective and the people help put everything in context. Reminds me of the trams in Los Angeles when I was a kid.

My first thought was, "Oh, no! Train wreck!"

Really cool that one, looks like it is going to push the car out the way, I even looed for the lines to go past the car.

What is that car doing parked on the tracks?

So good! What a wonderful capture.

nice one. like it.
also thank you for the information.
Cheers
feyza

It is quite vivid... and the style is old fashioned.

I recall a train museum up near Guelph... I assume there might be something about the line there.

This is really great! Here you can still find some of the old yellow trams working and I hope they will keep them in use for many more years.

If they were still operating today a lot of transit problems would be solved.

Love it! Too bad you couldn't get one without the car. I could almost get into the old-timey atmosphere without it. :)

Hi Pat. Thanks for your nice comment. I would just respond by saying, "Of course!" :))

Oh bugger, I think cities need that kind of transportation! It's a super mural and it must feel strange to park beneath it, like you're on a collision track!

Kuna is so darn talented. Really like the opposing forces of the train and car. Thanks for contributing to this week's Monday Mural.

This is quite nice. I like the detail. The boy hanging off the side has an interesting look on his face, kind of like he is daring anyone to tell him he can't do that!

A part of me wishes I were old enough to remember these lines (except then I probably wouldn't be alive today to blog about it!)

That's a nice one. Too bad it has a parking space in front of it.

Fantastic detail, make me feel nervous for the car parked in front of it!

o that is wonderful!

A wonderful mural. If I ever rode on a streetcar like this, it was as an infant, because I don't remember and there's no one left to ask.
However, I remember all the family legends about streetcars in Vancouver, BC, before I was born. My favourite was my grandfather chasing the streetcar after miscalculating the time he'd spent courting my grandmother. One of his brothers happened to be on the car (the last one of the night). He heard the footsteps, and had the car stopped to pick up the young lover.
K

Ha, this is really a good shot!

This is a beauty. You have shown Kuna's work before and I remember thinking that he is good at doing these murals.